In pictures, a Saudi artist embodies folklore with paintings 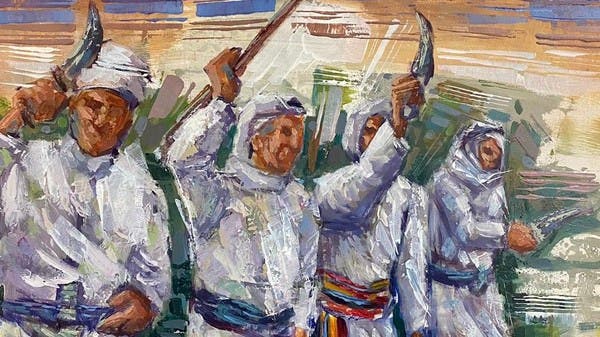 The plastic artist, Saleh Al-Shehri, expressed the most important details of folklore in the Kingdom in a distinctive way, translating it with artistic and folkloric paintings.

In an interview with Al Arabiya.net, he explained that he seeks, through his paintings, to present a realistic scene and produce it with a different image and scene.

And about his artistic style, he indicated that he tends to symbolism sometimes, so his paintings appeared in an aesthetic way that expresses the bright colors of the state of joy.

He explained that he likes to put certain symbols, whether by choosing the color or the elements in the work, and some symbols belong to him only, and they are not visible as he puts a love story in a heritage work and the recipient watches it as just folk dances.

He also indicated that he draws something that tells a story or a scene of his own, his life, a previous life, or his community in his own style.

Regarding the secret of his interest in folklore, he pointed out that “the beauty of folklore lies in the rooting of our culture, as it is part of our Saudi culture in different regions.”

He added that his future aspirations are to present more artistic works that have a great resonance in the arena and to have an important role in this field on a larger and broader scale. Therefore, he refines his artworks through painting with brushes and knives and presenting artistic forms that express the joy of the participants in traditional dress or Folkloric.

It is noteworthy that Al-Shehri is the recipient of the Diaa Aziz Prize for Portraiture, the Souk Okaz Prize, the Zahdia Prize 2019, and the Abdul Mohsen Al-Qahtani Literary Prize to achieve his ambition in artistic excellence.