In pictures.. the wonderful design of the pillars of the Prophet’s Mosque 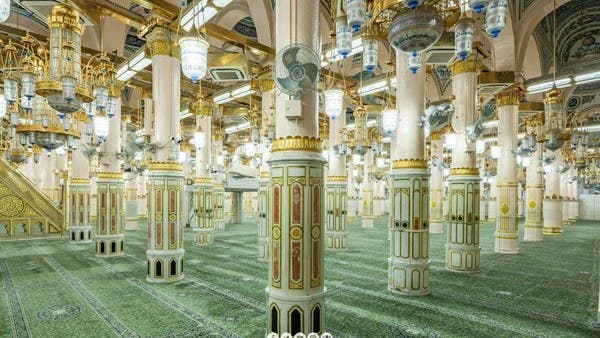 The old sanctuary in the Prophet’s Mosque from the inside contains 165 stone columns in a cylindrical shape, with an average height of 4,80 m from the base to the crown. These columns are surmounted by decoratively carved stone capitals and arches, and above them are domes.

The arches of the pillars of the Prophet’s Mosque and the curves of the domes were designed in harmony with the external structure, to give an aesthetic view, and the arch was not limited to carrying the structural mass that raises the ceiling, but was taken as an aesthetic view that supports the walls and embraces the windows, and the walls and columns of the Prophet’s Mosque are manifested by the beauty of Arabic calligraphy since Over 1300 years old.

Decorations inside the Prophet’s Mosque

Also, in the Prophet’s Mosque there are 8 ornate columns called “Asatin”, which bear names written in gilded calligraphy in the middle of a golden frame with a green background. , to be replaced by columns of stones that changed in the development of the architecture of the mosque over a period of 1440 years, which is the age of the Prophet’s Mosque.

Columns of the Prophet’s Mosque

Among the most important of these legends, whose location is linked to the history and biography of the Messenger, may God bless him and grant him peace, is the cylinder that was erected in the place of the trunk that yearned for the Messenger of God, so he had the best prayer and peace be upon him. The qiblah, and written on it “This is the cylinder of the creation.” It is also called the cylinder of the Qur’an. This cylinder was slightly presented towards the direction of the qiblah, and some of it was inserted into the noble Prophet’s mihrab.