In preparation for the Hajj season, the affairs of the Two Holy Mosques raise the covering of the Kaaba 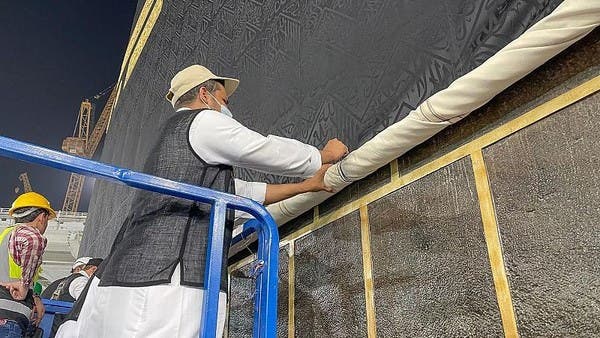 The General Presidency for the Affairs of the Grand Mosque and the Prophet’s Mosque has raised the lower part of the covering of the Kaaba by approximately three meters, and covered the raised part with a white cotton cloth, approximately two meters wide from all four sides, as was the annual custom and according to the approved plan for the Hajj season of this year 1443 AH. .

This procedure – in which the General President of the Affairs of the Grand Mosque and the Prophet’s Mosque, Dr. Abdul Rahman Al-Sudais – participated in the matter of precaution and maintaining the cleanliness and safety of the kiswa, as the presidency pays great care and attention to the covering of the Kaaba throughout the year, as an extension of the care and care of the guardians of the Two Holy Mosques and their facilities. in general, and the Kaaba in particular.

The Kaaba after lifting the kiswa

Al-Sudais stressed the importance of the great care and attention received by the covering of the Kaaba throughout the year from the wise leadership, as an extension of the interest of the Saudi government since its establishment at the hands of King Abdulaziz, in the Two Holy Mosques and their visitors and facilities in general, and in the Holy Kaaba in particular, and doing everything that would facilitate the guests of Rahman To perform their worship and Nskhm with ease and tranquility.