In the liberated Popasna, the Banner of Victory was installed on May 9 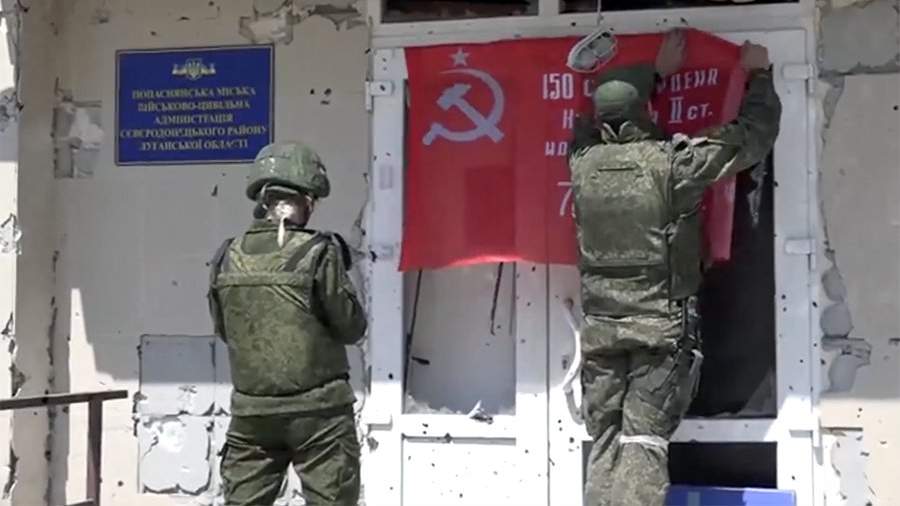 Servicemen of the People’s Militia of the Luhansk People’s Republic (LPR) installed the Banner of Victory in the city of Popasnaya, liberated from Ukrainian nationalists. The flag was placed on May 9 on the building of the local city administration.

As the soldier who installed the banner said, the banner is a symbol of memory of the victory of the ancestors and a symbol of the fact that their work in the fight against Nazism continues.

“For us, raising the flag right here, in the city of Popasna, is extremely significant today,” he said.

Also, local residents received St. George ribbons, they wear it without fear for their lives, as was the case under the nationalists.

“This means that the memory of the Victory, the great Victory, has not been lost. She continues to live in generations after 77 years, and so history will continue. And this memory will be preserved,” said one of the local residents.

Also on Victory Day, people were given kits with humanitarian aid, as the situation in Popasna is still critical, there is not enough food.

The St. George Ribbon was also given to fraternal servicemen from the LPR, who took part in the liberation of the city. Now they are clearing Popasna from the remaining Nazis.

On February 24, Russia launched a special operation to protect the civilian population of Donbass. As Kremlin spokesman Dmitry Peskov clarified then, the special operation has two goals – the demilitarization and denazification of Ukraine. Moscow also emphasized that it does not hatch plans for the occupation of Ukraine, and strikes are carried out only on the military infrastructure of the Armed Forces of Ukraine.

In mid-February, due to the aggravation of the situation in the Donbass as a result of increased shelling by the Ukrainian military, the DPR and LPR asked Moscow to recognize independence and announced the evacuation of the civilian population to Russia. On February 21, Russian President Vladimir Putin signed a corresponding decree.