In the video .. “The Quarter” tests the friendships of the stars in an entertaining competitive form 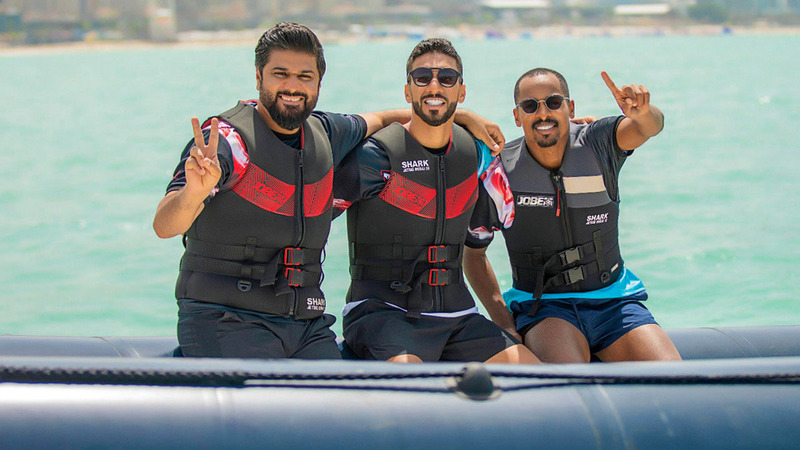 The Dubai Sports Channel, which is affiliated with the Dubai Media Incorporated, held, yesterday evening, a launch party for the “Al Rabaa” program in its new form, the most diverse and comprehensive for sports and art stars, and in a different way in presenting various aspects in their personal lives outside the framework of work, in a competitive, entertaining nature. “The Quarter” program during the ceremony held by Dubai Sports Channel under the patronage of Al Habtoor Palace Hotel, and was attended by: Abdul Rahman Amin, Director of Dubai Sports Channels at Dubai Media Incorporated, Executive Director of the Publishing Sector at Dubai Media Incorporated Ahmed Al Hammadi, President of the Professional League Abdullah Al Junaibi, and Executive Director The Dubai International Marine Club Mohammed Hareb, in addition to the sponsors of the program, Mai Dubai, Emirates Driving Institute, Emirates Central Cooling Systems Corporation (Empower), FA company producing the program, and Ghorour Photography.

Abdul Rahman Amin, Director of Sports Channels Department in the Radio and Television Sector at Dubai Media Incorporated, expressed his happiness with the launch of the “Quarter” program in its second edition. He said, “We seek to be the first program locally, Arab and regionally at the level of sports programs.”

He added: “For the first time on the Dubai Sports Channel, an external program was produced with artists and celebrities, in line with the directions of the Emirate of Dubai, with the aim of highlighting the capabilities and infrastructure that Dubai and the Emirates possess at all levels.”

He continued: “The program was not satisfied with sports goals, but also had a social and humanitarian role, as the idea is based on strengthening the concept of friendship, good companionship and how to create common practices that bring together (the quarter) in a positive and exciting framework dominated by the spirit of sports.”

The ceremony witnessed many surprises, including the launch of the program’s official song from the words of the national poet Ali Al-Khawar and composed by the ambassador of melodies, artist Fayez Al-Saeed.

The “Quarter” program consists of three main paragraphs. In the first paragraph, the stars of the episode, accompanied by the program presenter, visit one of the stars or champions of different sports such as: swimming, rugby, tennis, ice hockey and others, in order to organize a challenge and evaluate each star. He was awarded a special medal according to his performance in the challenge. In the second paragraph, the “quarter” (friends) practice various adventures characterized by excitement and suspense, such as taming lions, fishing, changing car tires, or driving cars on land, and other adventures that are characterized by their strength and danger, while the “quarter” lives in The third paragraph is the experience of practicing a specific profession for one day only, such as acting on stage, the profession of a taxi driver, or customer service in a large restaurant and other professions, with the aim of discovering the talents and “characters of the quarter”.

The program’s episodes were filmed in more than 50 destinations within the country, which are characterized by adventure and suspense, such as: Dip Dive Dubai (the deepest swimming pool in the world), Hatta Wadi Hub, parasailing, bullfighting in Fujairah, and others.

It is noteworthy that Hassan Habib presented many programs, most notably: the Oscar of the masses, the Emirates Congress, the fans of Asia, who also mixed art and sports, and many other interactive programs, including against the clock in the Dubai International Tour.

to watch the video, Please click on this link.