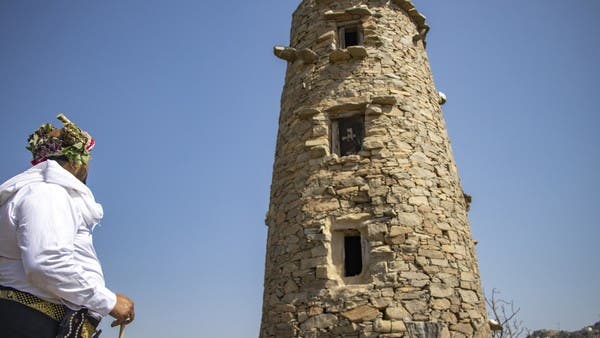 Photographer Abdul-Rahman Al-Huraisi documented these forts through scenes, highlighting the beauty of their architectural and engineering designs, which confirm the living skills possessed by the mountain man hundreds of years ago.

The splendor of building stone forts

Mufreh Mashawi added: The stone forts consist of several floors and are built in a cylindrical shape, and have a unique architecture that only stone fortification builders know, for its ability to withstand all natural factors such as earthquakes and storms, and these forts are characterized by the presence of grain and fruit storage rooms, which are Containers or so-called burials, where a type of fine earth is chosen, mixed with grains, and preserved for years without being affected, and also has an internal surface.

He continued his speech: Inside the forts there are rooms for weapons, another for cooking, and a room for guests, with a fixed bed built of stone and mud called “deck”, or hanging beds made of trees and called “sahwa”, and below the fortress is the kitchen and a large circular house, in which sheep and animals are placed. , to protect it from theft and monsters scattered in the past, pointing out that most of the stone forts have watchtowers.

The most famous forts

Mashawi continued, saying: One of the most famous stone forts in the Al-Hashr Mountains is Al-Hudaydah Fort, which is considered the gateway to the Al-Hashr Mountains from the western side. The deposit of money, weapons and precious jewelry for safekeeping, and the money of orphans is kept until they reach the age of majority, and it is considered as the central bank for the people of the Hasher Mountains. There is also a fortress of war, which is characterized by a unique building, an architect and other stone forts.