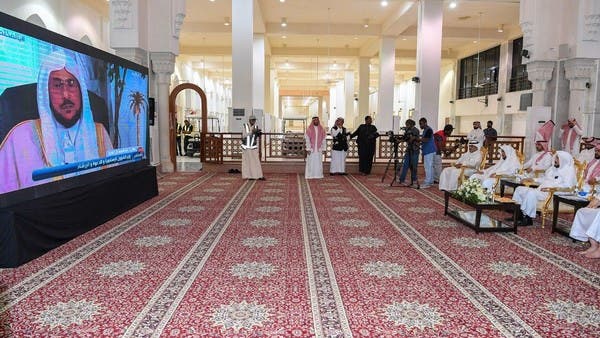 The Minister of Islamic Affairs, Call and Guidance in Saudi Arabia, Chairman of the Supreme Committee for the Ministry’s Works in Hajj, Umrah and Visitation, Dr. Abdullatif Al-Sheikh, inaugurated a number of qualitative projects to serve pilgrims during Hajj this year 1443 AH, with a total value of 90 million riyals, which included launching maintenance and operation projects For all the mosques of the Holy Sites, the Mosques of Al-Hal, and my project to adapt the two mosques of Al-Mashar Al-Haram and Umm Al-Mu’minin Aisha with Al-Tan’im, and Farsh Miqati Al-Juhfa and Yalamlam.
‎
This came during the inspection tour that Al-Sheikh made, yesterday evening, Wednesday, to the mosques of the holy sites to see their readiness to receive pilgrims, to prepare all services for the pilgrims before the start of the Hajj season.

The first project included 11 maintenance and operation contracts for all the mosques of the holy sites, with a total value of 64,735.552, including maintenance contracts, which pilgrims benefit from during this 1443 AH season.

The second project is the modernization and development of air conditioning and air purification systems in the Al-Mashar Al-Haram Mosque in Muzdalifah, which was completed at a total cost of 3,994,870 riyals, where the air purification process is carried out at a volume of 132,000 cubic meters at a rate of three times per hour, with a purification rate of 100.

Minister Al-Sheikh during his inspection tour

The third project includes replacing and changing the air conditioning and air purification systems in the Umm al-Muminin Aisha al-Tan’im Mosque, at a cost of 2,929,223 riyals. A remote intelligent control room to follow up on the operation, maintenance and control work.

The fourth project targeted the “Namera” mosque in the “Arafat” area, to distribute the electrical loads in the mosque at a total cost of 1,600,000 riyals. Each panel has a capacity of 1600 amps and 36 sub panels with a breaker of 400 amps and all panels are modern and self-protected.
‎
The fifth project to deliver water to the reservation mosques at the entrances to the Holy Capital and Miqat Al-Juhfa came at an amount of approximately 17 million riyals, as the project provides the mosques with water continuously.

It is noteworthy that the Minister of Islamic Affairs began his tour by standing at the “Al-Khaif” mosque in the “Mina” area, which stopped for two years due to the conditions of the pandemic. The mosque furnishing project and the pilgrims’ entry and exit paths implemented by the mosque’s working committees, and inspecting the electronic screens that present advocacy materials to guests in multiple languages.

Minister Al-Sheikh urged – during his meeting with participants in the ministry’s Hajj activities – to provide all services to the pilgrims and make more efforts to help the pilgrims.