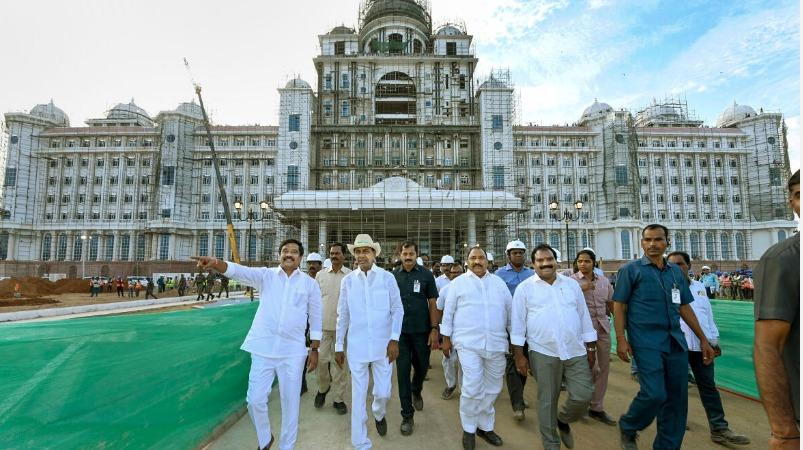 Hyderabad: The Telangana state government has decided to hold the grand opening of the new headquarters building in Hyderabad on February 17.

Telangana’s new headquarters is being constructed at a cost of Rs 650 crore in a 64,989 sq ft, 11 storied building near Hussain Sagar, Hyderabad, and its final construction is on a war footing. PR for this building. Ambedkar has been named after the state government.

The opening ceremony of this building is going to be held on February 17. Chief Ministers of Delhi, Kerala, Punjab, and various former Chief Ministers have been invited to attend this function.

The Chief Minister of Telangana, who is trying to form a third party at the center by uniting all the parties opposed to the BJP, has renamed his TRS party as Bharat Rashtra Samithi (PRS) and declared it as a national party.

The first public meeting of the PRS party was held in Khammam area a few days ago. Many important political party leaders including Chief Ministers of Delhi, Kerala and Punjab participated in this. However, Tamil Nadu Chief Minister M.K. Stalin did not participate. Therefore, many people are expecting that the Chief Minister of Tamil Nadu will attend the opening ceremony of the Telangana Chief Secretariat building, which is to be held on February 17.

Telangana State Governor Tamilisai Soundarrajan to participate in this function Chief Minister K. Will Chandrasekhara Rao make a call? The biggest expectation is that. Because in Telangana there is a big difference of opinion between the Governor and the Chief Minister.