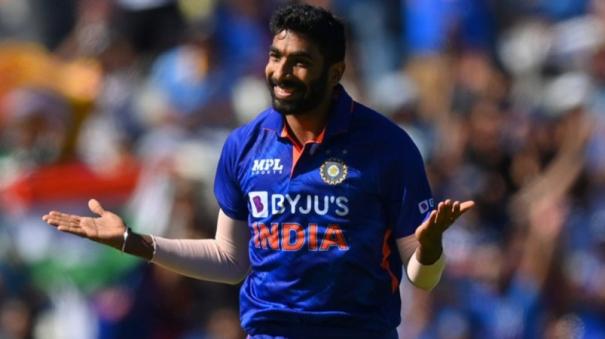 Oval: In the first ODI match, the Indian fast bowlers bowled out the England team for 110 runs. Bumrah took 6 wickets and recorded the best bowling performance of his career.

The Indian cricket team led by Rohit Sharma is touring England. The Test series between the two teams ended in a 2-2 draw. After this, the Indian team won the 3-match T20 series 2-1 and won the trophy. In this case, the two teams will face each other in a 3-match ODI series. The first match started today at The Oval in London.

Indian captain Rohit won the toss and elected to bowl first. Shikhar Dhawan of the team featured after a long time. Along with him, Prasith Krishna and Shami were also back in the team. Likewise, England, who lost the T20I series, was expected to make a strong comeback in the ODI series. This is due to the fact that Ben Stokes, Joe Root and Jonny Bairstow are back in the team and the team’s batting has strengthened.

But Indian fast bowler Bumrah took a look at England’s batting line-up as a story of what happened. Unable to cope with his attacking bowling, the English batsmen were stifled. Action players Jason Roy and Jonny Bairstow opened the innings. Bumrah started the attack before they started the action. He bowled Jason Roy in his first over and dismissed Joe Root in the second ball.

Shami, who bowled the third over on the other hand, sent Ben Stokes back to the pavilion as fast as he came. It was an added tragedy for England that these three top-order batsmen failed to score a single run. After a few overs, Bumrah made Bairstow walk, who had scored 7 runs. If Bairstow in the 6th over, Bumrah threatened Liam Livingstone in the 8th over.

While Shami and Bumrah took some rest, Prashit Krishna for his part dismissed Moeen Ali for 14 runs. For England, captain Jos Buttler scored the most runs in today’s match (30 runs). He was followed by David Willey (21 runs). Buttler was dismissed by Shami. Wille is dismissed by Bumrah. In the end, England lost all their wickets before scoring 110 runs in just 25.2 overs. Bumrah took 6 wickets for India, including 3 maiden overs. He conceded only 19 runs. Apart from him, Shami took 3 wickets.

The three pacers took 10 wickets together. Earlier in 2014, Indian fast bowlers had set this record against Bangladesh.