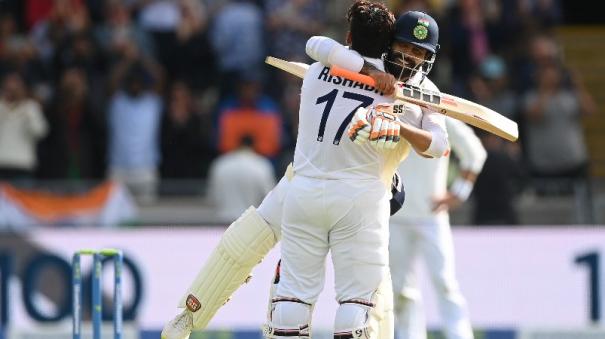 On the first day of the England Test, India scored 338 runs for the loss of 7 wickets.

Test cricket match between India and England started today. The Indian team batted first in the first day’s match at the Edgbaston Cricket Ground. Zara and Subman Gill were the openers for the Indian team. Gill took 17 runs and Anderson was bowled out.

Pujara played very cautiously with Vihari who came later. However, Pujara was dismissed in the last ball of the 18th over by Anderson. He was out for 13 off 46 balls. Virat Kohli, who was highly anticipated, scored only 11 runs off 19 balls and lost his wicket to England bowler Patts on an inside edge. Earlier, the one-down batsman Hanuma Vihari tested the England bowlers, but he faced 53 balls and made his way to 20 after the lunch break.

Shreyas Iyer returned to the pavilion within 15 runs after opening the innings with three fours.

Rishabh Pandu and Ravindra Jadeja rescued the Indian team who lost 5 wickets after scoring only 98 runs at the end of almost 28 overs. Pant bowled England’s bowlers to knock boundaries in the gap where Jadeja was relaxed. As a result, the score started to rise rapidly. Pant hit the fast bowlers with one boundary in the over and spinner Leach targeted the over and hit two three boundaries. Thus, he scored a fifty in 51 balls and crossed a century in 89 balls.

This is Rishabh Pant’s fifth century in Test cricket. It was also his second century against England. On the other hand, Jadeja also delighted the Indian fans with his half-century with a boundary. After crossing the century, Pant blasted fours and sixes. Two sixes and two fours in Leach’s single over saw India cross the 300-run mark in 63.1 overs.

Expected to score more than 150 runs, part-time bowler Joe Root was bowled out for 146 with an edge to the over. After Shardul Tagore’s arrival, England skipper Stokes was bowled out, and at the end of the first day’s play, the Indian team scored 338 runs for the loss of 7 wickets. Jadeja is on 83 runs and Shami is not out. Anderson took 3 wickets and Potts took 2 wickets.