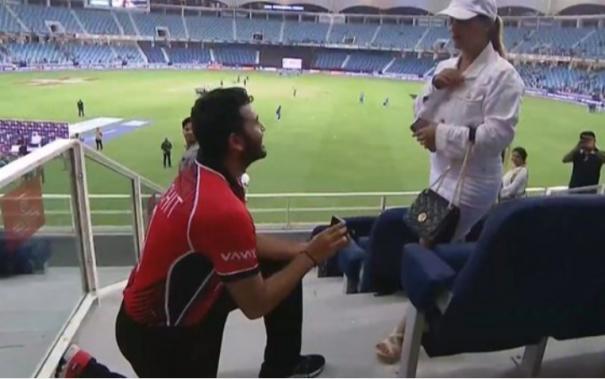 Dubai: Hong Kong cricketer Kinchit Shah has expressed his love to his girlfriend on the field after the match against the Indian team. His attempt has gone viral on social media. And let’s see if his girlfriend accepts his love.

The 26-year-old scored 30 off 28 balls in the match against India. It included two fours and a six. However, he was dismissed in the 18th over. A middle-order batsman, he has played 43 T20 Internationals for Hong Kong. With that he has scored 633 runs. He had scored 79 runs against Ireland in 2019. That is his highest score in a single innings in T20 cricket. He has also taken 11 wickets.

The Indian team won the match by 40 runs. He poetically expressed his love to his girlfriend who was on the field as the Hong Kong team lost the game.

Coming out of the dressing room, Kinsith goes to her friend, takes the ring from her pocket, and kneels before her to express her love. After a few seconds delay, her friend accepted her love.

She said YES!
A heartwarming moment where Hong Kong’s @shah_kinchit95 proposed to his SO after playing a big match against India
A huge congratulations to the happy couple. We wish you all the joy and happiness in your new life together #AsiaCup2022 #GetReadyForEpic pic.twitter.com/CFypYMaPxj