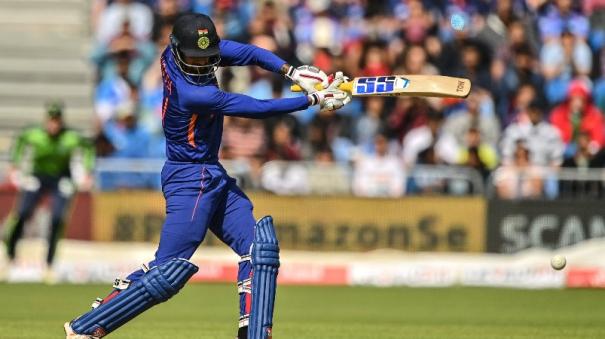 Dublin: India score 227 in the second T20I match against Ireland.

The Indian cricket team is touring Ireland to play in the two-match T20 series. Hardik Pandya captains the Indian team in this series. The Indian team won the first match. Meanwhile, the second match of the series is being played at ‘The Village’ cricket ground. India won the toss and elected to bat.

In parallel with the opening, Deepak Hooda found the field with Ishant Kishan. India lost the first wicket in the first ball of the 3rd over. Ishant Kishan, who had scored just 3 off the ball, gave up a catch and walked away. Sanju Samson landed in One Town today at Aadum Eleven. He and Deepak Hooda together scattered Irish bowling.

No matter how hard the Irish bowlers tried, they could not be separated. Sanju Samson, to complete his half-century off 31 balls, was followed by Deepak Hooda on the other hand who crossed the fifty. Joining in the 3rd over, Mark Adyar split the alliance. That too in 16.2 overs. Sanju Samson, who had scored 77 runs in the fifties, was bowled in the slow yorker of the innings.

Deepak Hooda, meanwhile, scored his first century in an international T20 match. In 55 deliveries, Vlasi took his first century with 9 fours and 6 sixes. Expected to last till the final over, he was out for 104 in the final ball of 18 overs. The Indian team then scored 227 for 7 in the allotted 20 overs. For Ireland, Mark Adair top-scored with 3 wickets, while Little and Young took 2 wickets each.

Deepak Hooda became the fourth Indian batsman to score a century in an international T20 match by scoring a century in today’s match. KL Rahul has scored twice, while Suresh Raina and Rohit Sharma have scored once each. Deepak Hooda has also joined the ranks.