IND vs NZ | Asathya Siraj took a wicket in his hometown: The family came to watch the match 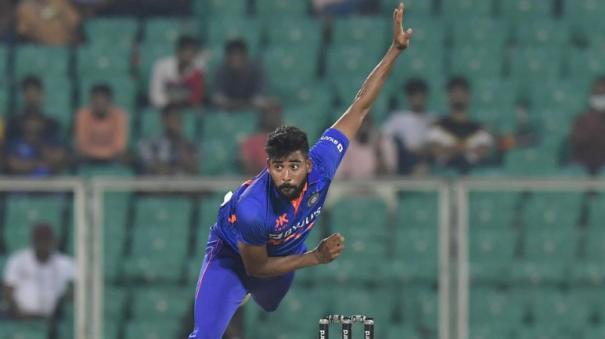 Hyderabad: Indian bowler Mohammad Siraj has taken a wicket in the one-day cricket match against the New Zealand team in his hometown. His family has also come to the stadium to watch him play.

The 28-year-old right-arm fast bowler Siraj is one of the indispensable players in the Indian team. In ODI cricket, he bowls tremendously and takes wickets. Hailing from Hyderabad city. The first ODI between India and New Zealand is currently being played in Hyderabad.

A local player, he has unanimous fan support. Whenever he comes to bowl, they cheer and amaze. Besides, his family has also come to the stadium to witness the match.

In this case, he took the wicket of New Zealand player Devon Conway. Siraj took the wicket in the 6th over of the second innings. The expression of joy at his hometown wicket capture was evident in his body language. So far he has bowled 7 overs and taken 2 wickets by giving 29 runs including 2 maidens. His second wicket was New Zealand captain Tom Latham.

First success with the ball for #TeamIndia!
First international wicket on his home ground for @mdsirajofficial