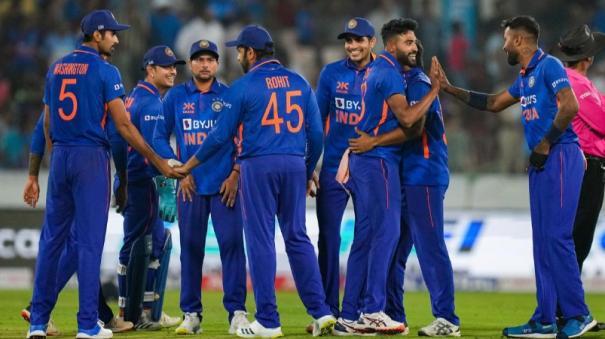 Hyderabad: India won the first ODI against New Zealand by 12 runs. The game went to the final over. Bracewell threatened the Indian team’s victory with his action. However, India won by taking his wicket as the last wicket.

New Zealand cricket team is touring India and playing cricket series with India. Both the teams are currently playing a three-match ODI series. The first match of this series was played in Hyderabad today.

The Indian team won the toss and elected to bat first. 349 runs scored at the end of 50 overs. New Zealand chased down the target of 350 runs to win.

The team did not get the required partnership and kept losing wickets at regular intervals. Conway, Allen, Henry Nicholls, Mitchell, Glenn Phillips, Tom Latham, six batsmen lost their wickets when the team reached 131 runs. Then Santner and Bracewell formed a great partnership.

The two put on a partnership of 161 runs. They were attacking the bowling of the Indian team. Bracewell hit a century, Santner passed his half-century. Siraj broke this risky alliance. He dismissed Santner for 57 runs.

Bracewell was busy driving the ball to the boundary though. The team needed 20 runs to win in the last over. Bracewell was on strike. That over was bowled by Shardul Thakur. He hit a six off the first ball. The next ball was bowled empty. Next ball, Bracewell is out to LP at straight leg. He scored 140 runs off 78 balls. It included 12 fours and 10 sixes.

New Zealand were all out for 337 runs in 49.2 overs. India won by 12 runs. Siraj took 4 wickets for the Indian team. Along with that, his bowling also restricted the opponent’s run accumulation.

Earlier, captain Rohit Sharma and Gill opened the innings in the first innings of this match. Rohit was out for 34 runs. Kohli and Ishan Kishan, who followed, got out with single digit runs.

Gill then put on a partnership of 65 runs with Suryakumar Yadav and 74 runs with Hardik Pandya. Suryakumar lost their wickets for 31 runs and Pandya for 28 runs.

Washington Sundar and Shardul Tagore were quick to return to the pavilion. At the same time, the Indian team did not hit a boundary till about 26 balls. Gill, however, had fireworks in the last three overs. He got out after scoring 208 runs off 149 balls in the last over after a rain of sixes. He hit 19 fours and 9 sixes.