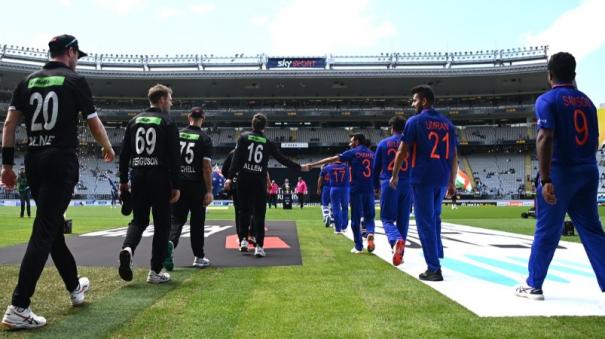 Hyderabad: New Zealand cricket team has visited India to play a series of 3 ODIs and 3 T20Is. The first one-day cricket match will be held in Hyderabad today at 1.30 pm.

With the 50-over World Cup at the end of this year, every ODI match is considered important. In this way, the Indian team can focus on building on the series wins against the Sri Lankan team. The Indian team got two positives from the Sri Lanka series. All 3 players in the batting top order have returned to form. Another is that Siraj has developed his wicket-taking skills with the new ball.

Like Shubman Gill, Virat Kohli, Rohit Sharma has renewed his connection with the bat. A big century is expected to emerge from him this time. Virat Kohli is starting to chase runs again and may put pressure on the bowlers of the New Zealand team.

Spinner Axar Patel was also absent from the series. Shabash Ahmed has been included in the team in his place. However, the team management may be more interested in fielding Washington Sundar than him. Washington Sundar’s spin might help because New Zealand has a large number of left-handed batsmen. Similarly, Yuvendra Chahal is likely to be replaced by Kuldeep Yadav in the playing XI. Hardik Pandya can add strength as an all-rounder along with Siraj, Shami and Umran Malik in fast bowling.

In the New Zealand team, Kane Williamson and Tim Southee did not play in the series against India. The team is led by Tom Latham. Ben Allen, Daven Conway and Glenn Phillips have added strength in the batting. They can put pressure on the Indian bowlers.

Shreyas Iyer, a stand-in in the middle order, has been ruled out of the series against New Zealand due to back pain. He scored 28, 28 and 38 runs respectively in the series against Sri Lanka. Shreyas Iyer is out and may be replaced by Suryakumar Yadav. It is doubtful that Rajat Pattidar, who has been included as a replacement for Shreyas Iyer, will get a chance. Suryakumar Yadav could swing the bat in the middle order and in the finals along with Hardik Pandya.