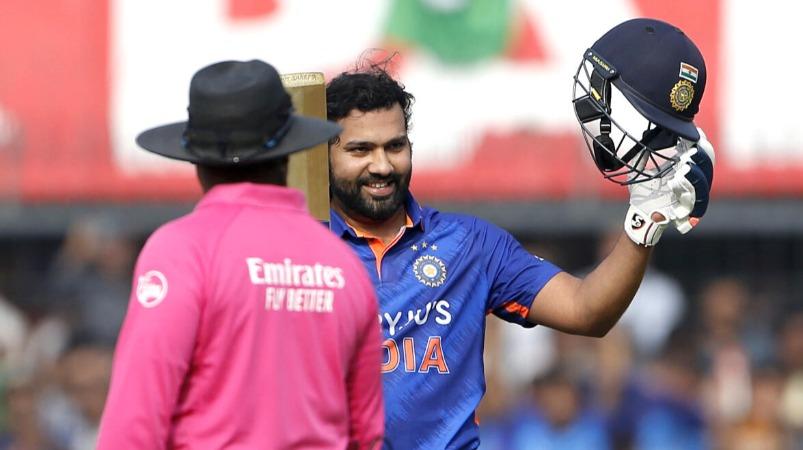 Indore: India won the 3rd ODI against New Zealand by 90 runs to complete the 3-match ODI series 3-0 and win the trophy.

Batting first in the 3rd match at the Holkar Stadium in Indore yesterday, the Indian team scored 385 runs for the loss of 9 wickets in 50 overs thanks to the action centuries of Rohit Sharma and Shubman Gill. The pair put on an impressive 212 for the first wicket in 26.1 overs. Rohit Sharma, who hit his 30th century, scored 101 runs off 85 balls with 6 sixes and 9 fours, while Michael Bracewell was bowled.

Meanwhile Shubman Gill, who passed his 4th century in 72 balls, scored 112 runs in 78 balls with 5 sixes and 13 fours and was dismissed by Blair Tickner. Shubman Gill chased 22 runs with 4 fours and a six in the 8th over bowled by Lockie Ferguson. Rohit Sharma and Shubman Gill were dismissed and the Indian team’s run rate slowed down.

The middle-order batting suffered a steep decline when India were expected to score more than 400 runs. Ishan Kishan was run out for 17 runs. Jacob Duffy was out after Virat Kohli scored 36 off 27 balls with one six and three fours. Suryakumar Yadav made the walk on 14 runs. Hardik Pandya, who swung the bat in the final phase, was dismissed for 54 runs off 38 balls with 3 sixes and 3 fours. Supporting him were Washington Sundar 9 and Shardul Thakur 25 runs. Kuldeep Yadav (3) was run out in the last ball.

Batting with a target of 386 runs, the New Zealand team was bowled out for 296 runs in 41.2 overs. Daven Conway top scored with 138 runs and Henry Nicholls added 42 runs.

Kuldeep Yadav and Shardul Thakur took 3 wickets each for the Indian team.

India won the trophy by 90 runs to complete the 3-match ODI series 3-0. The Indian team won the first match in Hyderabad by 12 runs and the second match in Raipur by 8 wickets.

It also became Rohit Sharma’s 30th century in ODI cricket. With this, 35-year-old Rohit Sharma has equaled Australia’s Ricky Ponting’s record of 30 centuries in the list of most hundreds in ODIs.

Rohit Sharma has reached this milestone in his 241st match. Ricky Ponting scored 30 centuries in 375 matches. Sachin Tendulkar (49 centuries) and Virat Kohli (46) are the top two in this category.

2nd Quick Century..: Rohit Sharma scored an 83-ball century against New Zealand in the Indore match. This is his 2nd fastest century. Earlier in 2018, he scored a century in Nottingham against England in 82 balls.