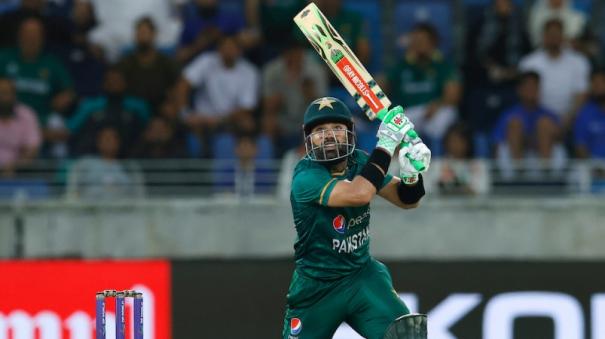 Dubai: Pakistan team won the T20 match against Indian cricket team by 5 wickets. It is noteworthy that this match went to the final over.

India and Pakistan cricket teams played in the Super 4 round of the ongoing Asia Cup series at the Dubai Cricket Stadium. Pakistan won the toss and bowled first. Pakistan chased down the target of 182 runs to win.

Captain Babar Azam and Mohammad Rizwan were the openers for the team. The team needed a strong start. However Babar was out for 14 runs. Fawker Zaman lost his wicket for 15 runs.

After that, Rizwan counter-attacked the bowling of the Indian team along with Mohammad Nawaz. The two put on a partnership of 73 runs. Nawaz scored 42 runs off 20 balls. Rizwan scored 71 runs off 51 balls. Asif Ali scored 16 runs in 8 balls and got out.

Pakistan scored 182 runs for the loss of 5 wickets in 19.5 overs. With that, the team won by 5 wickets. Both Hardik Pandya and Sahal bowled 4 overs and scored more than 40 runs. Bhuvneshwar had given 40 runs. In the 18th over, Indian player Arshdeep had missed a catch. Notably, that catch made a small difference in the end of the game.

Earlier, captain Rohit Sharma and KL Rahul were the openers for the Indian team.

Both added 54 runs for the first wicket. Both added runs well in the power play overs. Rohit scored 28 runs off 16 balls and lost his wicket. Kohli then came to the field. At the other end, Rahul scored 28 runs in 20 balls and got out. Suryakumar Yadav lost his wicket for 13 runs. Rishabh and Hardik Pandya, who came later, lost wickets in quick succession. Deepak Hooda was dismissed for 16 runs.

That’s that from another close game against Pakistan.

Up next, #TeamIndia play Sri Lanka on Tuesday.