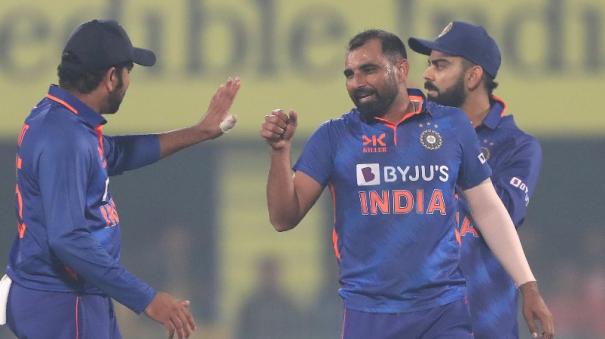 Guwahati: Indian cricket team won the first ODI against Sri Lanka by runs. Chasing a target of 374 runs, the Sri Lankan team lost 8 wickets and reached 306 runs at the end of 50 overs. Shanaka, the captain of the team, played tremendously and scored a century.

The Sri Lankan cricket team is touring India and playing cricket series. The team lost the recently concluded T20 series by 1-2. Currently playing a 3-match ODI series with the Indian team. The match was held in Guwahati and was the first match of the series.

Sri Lanka won the toss and chose to bowl. The Indian team batted first and scored 373 runs for the loss of 7 wickets. Sri Lanka chased down the target of 374 runs.

The team lost wickets at regular intervals to one side. However, captain Shanaka, opener Nissanka (72 runs) and Dhananjaya de Silva (47 runs) batted well. Shanaka was unbeaten on 108 off 88 balls till the end. He had formed a partnership of 100 runs with Rajitha for the 9th wicket. At the end of 50 overs, the team had reached 306 runs. With that, the Indian team won by 67 runs.

Earlier, captain Rohit Sharma and Subman Gill were the openers for India in the first innings. The two put on a 143-run partnership for the first wicket. Gill lost his wicket on 70 runs and Rohit on 83 runs.

A small partnership was formed between Kohli and Shreyas Iyer. Shreyas, however, was out for 28 runs. Kohli then put on a partnership of 90 runs with Rahul. Rahul was out for 39 runs.

Kohli, who was batting aggressively at the other end, registered his 45th century in ODI cricket. He was dismissed for 113 off 87 balls. His strike rate is 129.89. Hardik lost his wicket for 14 runs and Axar Patel for 9 runs. The Indian team had accumulated 373 runs for the loss of 7 wickets.