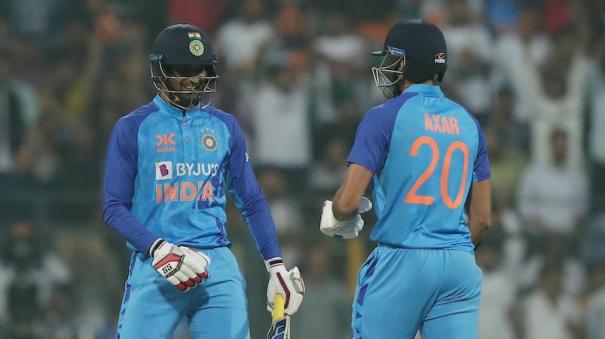 The Sri Lankan team is touring India and playing T20 and ODI cricket series. Currently, both the teams are doing many tests in the T20 series. The first match of the series is currently underway at the Wankhede Stadium in Mumbai.

The Sri Lankan team won the toss and chose to bowl. The Indian team is playing in this match under the leadership of Hardik Pandya. India batted first and scored 162 runs for the loss of 5 wickets in 20 overs.

Indian opener Ishan Kishan was dismissed after scoring 37 runs. Captain Pandya was out on 29 runs. Deepak Hooda, who joined later, scored 41 runs off 23 balls and Axar Patel scored 31 runs off 20 balls. Both did not lose their wickets till the end. Hooda hit 4 sixes in this.

The Sri Lankan bowlers threatened the Indian batsmen with their quality line and length in few overs of the game. Currently, the Sri Lankan team is chasing the target of victory if they score 163 runs. It was a challenging task for the Indian team to cross 150 runs in this match. Deepak Hooda and Akshar Patel alliance destroyed it. The two put on a partnership of 68 runs.