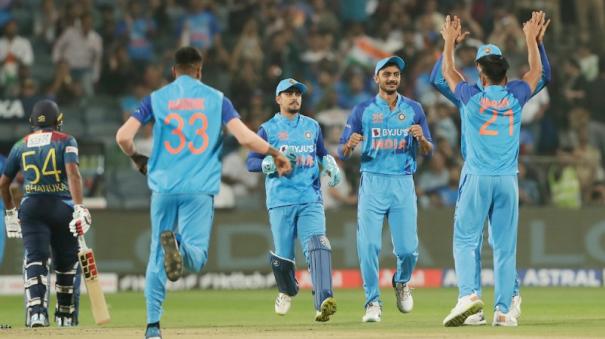 Pune: Sri Lanka scored 206 runs for the loss of six wickets in the second T20I against India. Gusal Mendis, Asalanga and captain Shanaka of the team played tremendously and scored runs. Akshar Patel, Sahal and captain Pandya bowled well on behalf of the Indian team. But other bowlers had given away runs.

The Sri Lankan team is playing cricket on tour in India. Both teams are currently playing a 3-match T20I series. After India won the first match, the second T20I started today in Pune. India won the toss and chose to bowl.

Sri Lanka can tie the series 1-1 only if they win this match. Otherwise the series will be lost. The team played with that in mind. So the Sri Lankan batsmen were busy chasing the ball to the boundary right from the start.

The Sri Lankan openers put up a partnership of 80 runs for the first wicket. Mendis scored 52 runs off 31 balls. After that, Indian spinners Akshar Patel and Sahal bowled tremendously and controlled the run accumulation in Sri Lanka.

But it all turned upside down in the last 5 overs. Again the Sri Lankan batsmen continued to accumulate runs. After scoring 129 runs at the end of 15 overs, the team scored 77 runs off the last 30 balls. The reason for this is that the Indian fast bowlers bowled without control. They also bowled a no-ball and teased the audience.

The Sri Lankan captain scored 56 runs off 22 balls. Asalanga scored 37 runs off 19 balls. So the team scored 206 runs at the end of 20 overs. Now India is chasing the target. Ishan Kishan, Gill and Tripathi lost their wickets within 3 overs.