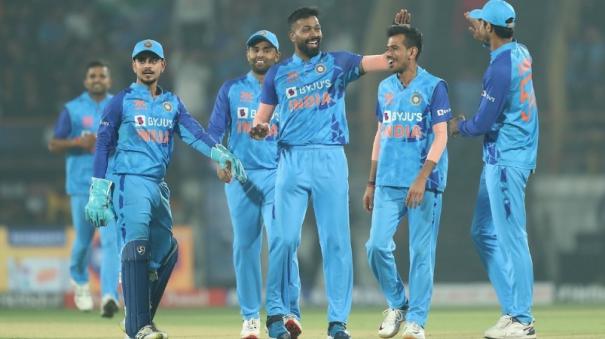 Rajkot: India won the 3rd and final T20 against Sri Lanka by 91 runs.

Chasing a mega target of 229 runs, Nisanga and Kushal Mendis, who gave Sri Lanka a great start last time, got out quickly this time. Akshar Patel broke this alliance that held on until the power play. Kushal Mendis got out for 23 runs as the first wicket, and Arshdeep Singh dismissed Nisanga for 15 runs in the next three balls. Bowling the next over, skipper Pandya walked Fernando for 1 run.

Asalanga and Dhananjeya, who played a little steady, got Chahal out for 19 and 22 respectively, and the game gradually came into the hands of the Indian team. Other than Sri Lankan captain Dasun Shanaka, who came after this, others were dismissed by few runs. Shanaka was on 23 when Arshdeep Singh bowled him and dismissed Madhushanka for the last wicket in the same over to set India up for victory. Sri Lanka scored only 137 runs in 16.4 overs losing all wickets. With this, the Indian team won by 91 runs and won the series 2-1. Arshdeep Singh took 3 wickets for the Indian team.

India Innings: Indian captain Hardik Pandya won the toss and elected to bat. Accordingly, Ishan Kishan and Subman Gill were the co-openers for the Indian team. In the first over, Ishan Kishan got out for 1 run and the next Rahul Tripathi joined hands with Subman Gill. Both of them combined to increase the team’s score, Rahul Tripathi took the lead with 35 runs in the 6th over.

Suryakumar Yadav came next to scatter the Sri Lankan bowling all around while Subman Gill on the other hand left the field with 46 runs. Next, Hardik Pandya and Deepak Hooda both returned to the pavilion with 4 runs each. India added 228 runs for the loss of 5 wickets at the end of the stipulated 20 overs thanks to Suryakumar Yadav’s action. Suryakumar Yadav was unbeaten on 112 off 51 balls and Axar Patel on 21 off 9 balls.

For the Sri Lankan side, Dilsan Madhushanka took 2 wickets, Kasun Rajitha, Vahindu Hasaranga and Samika Karunaratne took one wicket each.