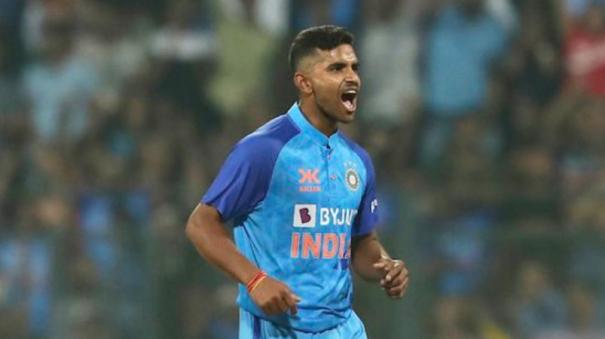 Mumbai: Shivam Mavi, the bowler of the Indian cricket team, has taken a wicket in his debut international T20 cricket match. It is noteworthy that he took his first wicket in the first over bowled.

24 year old Shivam Mavi is a right arm fast bowler. He plays for Uttar Pradesh in domestic cricket and Gujarat in IPL cricket. Last season he played for Kolkata Knight Riders. In this case, he made his debut in the first match of the T20 series against Sri Lanka at the Wankhede Stadium in Mumbai.

In the first over he bowled the ball at a different length and confused the opposition batsman Nissanka. So he made the clean bolt too. The ball that took the wicket was brilliantly bowled. In the second over he bowled, Dhananjaya de Silva also took the wicket. He has so far bowled two over spells in this match and conceded 17 runs and taken 2 wickets.

At the end of the powerplay overs, Sri Lanka scored 35 runs for the loss of 2 wickets. The team is chasing a target of 163 runs in this match.