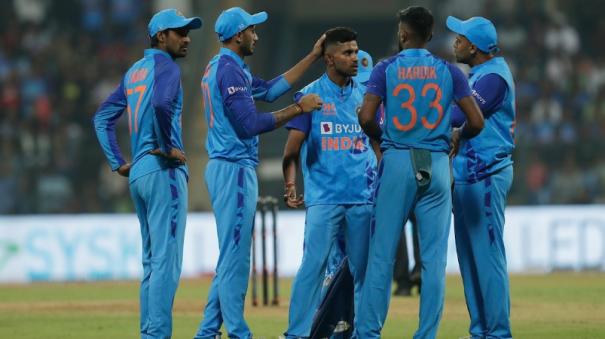 The Sri Lankan team is touring India and playing T20 and ODI cricket series. Currently, both the teams are doing many tests in the T20 series. The first match of this series was played today at the Wankhede Stadium in Mumbai.

Chasing a target of 163 runs, the Sri Lankan team lost their first wicket in the second over. Debutant Indian bowler Shivam Mavi bowled the ball at a different length in the first over, confusing the opposition batsman Nissanka and clean bowling him in the last ball. In the second over he bowled, Dhananjaya de Silva also took the wicket.

Harshal Patel dismissed Kushal Mendis for 28 runs as Kushal Mendis stayed for a while before Umran Malik dismissed Asalanga. After that Rajapaksa and Hazaranga took wickets at regular intervals, but captain Dasun Shanaka played aggressively and showed the Indian bowlers for a while. He was bowled by Umran Malik who added 45 runs off 26 balls with 3 sixes. After this the game came to India. Akshar bowled Sri Lanka in the last over needing 13 runs to win.

Sri Lankan player Karunaratne flew for a six in the third ball after bowling the first ball as a blank. A run and a run out were scored in the next two balls to require 5 runs from 3 balls. Sri Lanka scored only one run in the situation of winning if they score 4 runs in one ball. This resulted in the first victory of the Indian team in the series by two runs.

24-year-old Shivam Mavi took 4 wickets on debut with a wicket in his last over. Earlier, Indian players had missed field at some places in the game. At the same time, Ishan Kishan took a brilliant catch and dismissed Asalanga.

Indian Team Innings: Indian opener Ishan Kishan was dismissed after scoring 37 runs. Captain Pandya was out on 29 runs. Deepak Hooda, who joined later, scored 41 runs off 23 balls and Axar Patel scored 31 runs off 20 balls. Both did not lose their wickets till the end. Hooda hit 4 sixes in this.

The Sri Lankan bowlers threatened the Indian batsmen with their quality line and length in few overs of the game. Currently, the Sri Lankan team is chasing the target of victory if they score 163 runs. It was a challenging task for the Indian team to cross 150 runs in this match. Deepak Hooda and Akshar Patel alliance destroyed it. The two put on a partnership of 68 runs.