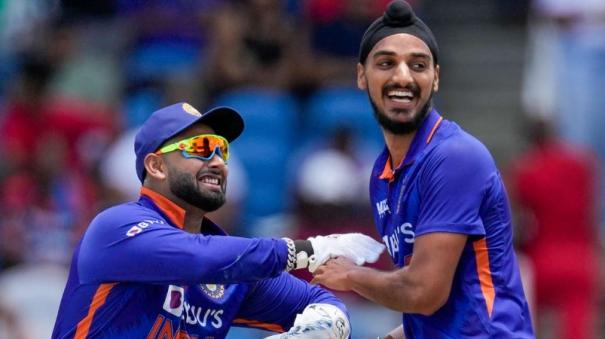 The 4th T20 match between India and West Indies was held yesterday. Batting first, the Indian team scored 191 runs for the loss of five wickets in 20 overs. Skipper Rohit Sharma, who was out of the last match due to injury, took the field in this match. Suryakumar Yadav opened with him as usual. Both showed action in the power play overs. However, Rohit Sharma took the first wicket with 33 runs in 4.4 overs.

Suryakumar Yadav was also dismissed for 24 runs in the next over. Deepak Hooda, who replaced Hardik Pandya in this match, was dismissed for 21 runs. Rishabh Pant bowled calmly and scored 44 runs. Sanju Samson scored 30 runs and Axar Patel scored 20 runs in the final.

Chasing a target of 192 runs, Brandon King started the innings aggressively but failed to last. He was dismissed by Avesh Khan. Those who followed him kept coming and going. The Indian bowlers bowled out the West Indies batsmen at regular intervals at the rate of one wicket per two overs.

As a result, West Indies lost all their wickets in 19.1 overs and scored only 132 runs. Puran and Powell both scored the maximum runs of 24 runs in that team. Arshdeep Singh took the maximum 3 wickets for the Indian team. Avesh Khan, Ravi Bishnoi and Axar Patel took 2 wickets each. The Indian team won by 59 runs and won the series 3-1.

This is the fifth T20I series that the Indian team has won in a row. It was also their 13th consecutive series (ODI, Test, and T20I) win against the West Indies.