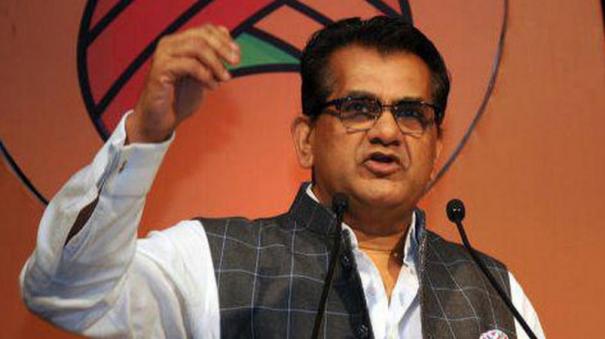 India has assumed the presidency of G-20. In this regard, in an article written by Amitabh Kant, Chairman of the India Committee of the G20 and former CEO of Niti Aayog, he said:

India yesterday assumed the leadership of the G-20, a group of 20 countries comprising the world’s largest economies. It is a special moment in the history of Indian diplomatic relations. The G-20 serves as a leading forum for discussion on key issues including the Sustainable Development Goals, climate action, food security, public health systems, and digital transformation, as well as an organization with strong political influence.

As the chairperson of the G-20 organization, India has the opportunity to act as a representative to protect the interests of emerging countries. With a rich history of alliance building and the world’s largest youth population, India is committed to following global best practices and prioritizing issues that require immediate solutions. An unprecedented 43 leaders will attend the final summit in Delhi in September next year. It shows that India’s leadership will be inclusive, ambitious, decisive and action-oriented, in line with Prime Minister Narendra Modi’s announcement in Bali this year.

At a time when India is chairing the G-20 organization, the impact of the pandemic and the impact of climate change are a major threat. India’s leadership will give greater emphasis to climate action. Special attention will be paid not only to climate finance and technology, but also to ensuring energy transitions for developing countries around the world.

India is introducing to the world a movement created to protect the environment from our country’s rich, age-old sustainable traditions, as climate change can impact industry, society and various sectors. India is giving priority to producing green hydrogen. India aims to achieve a production target of 25 million tonnes per annum by 2047. This aims to grow clean energy technology to the extent that it can be exported in the coming years.

The coronavirus pandemic has already had a major impact on the achievement of the United Nations’ Sustainable Development Goals. The world is at a time when urgent public health and food issues need to be emphasized. Leaders of the G-20 must make a concerted effort to commit to achieving these goals. Through this they should commit themselves to develop a better clean, healthy and prosperous earth for the people. The world needs contemporary systems to meet contemporary challenges.

The G-20 must further accelerate its commitment to achieving the UN’s Sustainable Development Goals, which will enable people to live a better, cleaner, healthier and more prosperous Earth. India will continue to push for the creation of responsible and inclusive international organizations.

The Government of India continues to implement the technology effectively. The G-20 chairmanship will be an opportunity for India to share its experiences and knowledge with the world. With the successful implementation of the world’s largest biometric identification system (Aadhaar), the Government of India is successfully implementing direct benefit transfer procedures between 2014 and 2022. Based on these experiences and the data of the implemented projects, India will take the experiences to the world. In October 2022, around 700 crore transactions have been made through India’s UPI scheme. This equates to 230 million transactions per day. Such successful operations set an example for other countries.

Chairing the G-20, India has exemplified a human-centric approach to technology. From education to agriculture, India is prioritizing public digital integration, inclusive finance and technology-driven growth. The government is implementing various schemes with the priority of empowering people especially women. Steps have been taken to regularize financial disbursement to all through Jandan, Aadhaar and mobile phone connectivity. 56 percent of Jandan Bank accounts are owned by women. 23 crore women who were previously unconnected through bank accounts now have bank accounts.

2023 is shaping up to be a golden year of global significance for India. Formulating policies based on consensus in the current scenario is not an easy task. India is chairing the G-20 while the conflict between Russia and Ukraine is threatening the development levels and geopolitical relations among the world’s most powerful nations.

A world without war

While the international economy is currently experiencing a recession, countries continue to struggle with poor food security and disrupted supply chains. In this scenario, India has the opportunity to emerge as an integrated, harmony-promoting nation. India under the leadership of Prime Minister Modi played an important role in reaching a consensus on the draft report of the G-20 summit held in Bali. Strengthening India’s position as an ambassador of peace, the Prime Minister’s speech that “the present era must not be full of war” was directly reflected in the joint declaration.

In an environment where old power centers are giving way to young, emerging countries in economic and social development, India’s ambitious effective leadership will mobilize new forces towards the needs and interests of the oppressed. India will continue to engage in activities that turn international challenges into opportunities for change towards the path of One Earth, One Family, One Future.