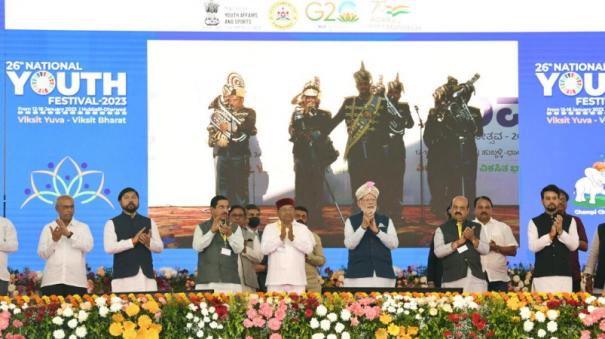 Speaking at the function, the Prime Minister said: More than 5 lakh youths from all over the country are participating in the function. More than 7,000 youth representatives who are excelling in the fields of mathematics, science, engineering, industry and agriculture are participating. The festival has laid the groundwork for these representatives to showcase their talent.

India has the highest youth power in the world. The intellectual capacity and action potential of the Indian youth has attracted the thinkers of the world. As a result, the voice of 21st century, India’s century has started echoing all over the world.

This century is the century of Indian youth. Youngsters must work tirelessly to achieve their set goals. If we act decisively we can overtake even the most advanced country. So youth should always act with positive thinking. This generation of youth is very special. The potential of Indian youth has grown to make a global impact. Youth power is the driving force of India. That is what takes the country on the path of progress. Economic growth offers many opportunities to the youth of India. Thus he spoke.

Prime Minister Narendra Modi drove from Hubli Airport to the railway ground where the event took place. Then a 16-year-old youth bypassed the security forces, approached Modi and extended the garland. It was confiscated by security officials. On receiving this, Modi bought the garland and kept it in his car.