India means trade; The country will lead the next technological revolution: Prime Minister Modi is proud 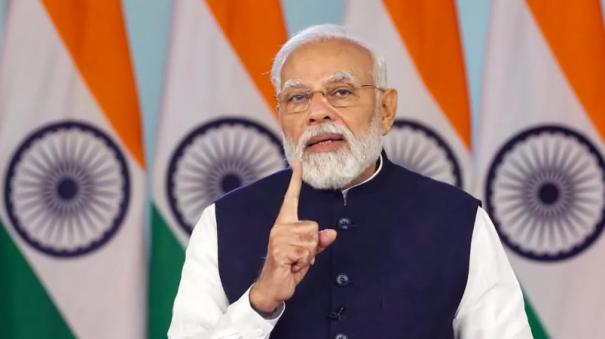 New Delhi: India is leading the way in the next technological revolution, India is heading towards tremendous economic growth in the fastest growing startup ecosystem in the world, we are translating India as trade. As Prime Minister Modi spoke at the Semicon India Conference.

Prime Minister Narendra Modi, who inaugurated the Semicon India Conference 2022 via video, shared his views at the inaugural function. It was attended by Union Ministers, executives of semiconductor companies, investors, academics and foreign diplomats. Speaking on the occasion, Prime Minister Modi said:

Our joint objective is to make India a major partner in the global semiconductor supply chain. We want to work on the principles of high-tech, high-quality and high-reliability. There are six reasons why India is the best country to attract semiconductor technology based investment.

First, India is developing a digital framework to connect more than 1.3 billion Indians. The recent progress made by India in the internal financial services, banking and digital currency revolution is significant.

We use digital technology to transform lives in all forms of governance, from health and family to inclusive and empowering.

Third, India is heading towards tremendous economic growth in the world’s fastest growing startup ecosystem. India’s own semiconductor usage is expected to cross $ 80 billion by 2026 and $ 110 billion by 2030.

Fourth, India is undertaking comprehensive reforms to improve the ease of starting a business. Measures such as the abolition of more than 25,000 ancient practices are important. Auto renewal of licenses, expediting the process of regularization through transparency and digitalisation and making India one of the most favorable tax regimes in the world.

Sixth, India is taking various steps to bring about change in the Indian manufacturing sector. India is improving not only the health of our people but also the economic health of the country at a time when humanity is facing a catastrophic catastrophe once a century.

It has been providing more than $ 26 billion in incentives in 14 key sectors through its manufacturing-linked incentive program. Over the next five years, the electronics manufacturing sector will experience unprecedented growth. The Semi-Con India project with a total value of over $ 10 billion was recently announced.

New world practice is emerging. Take advantage of new emerging opportunities. We have been working for the last few years to create an environment that promotes growth. India is keen on tackling technology and challenges. We are taking advantage of as many conflicts as possible through the support policy environment. India means trade.