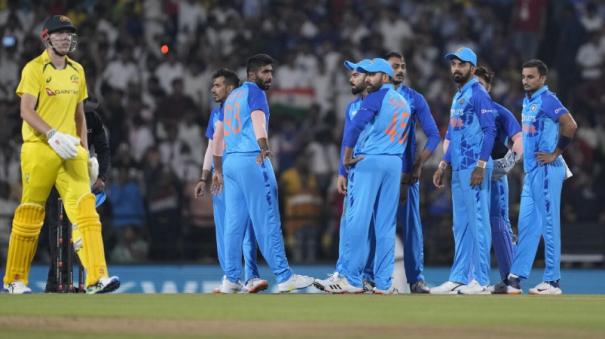 Hyderabad: The 3rd T20I between India and Australia will be held in Hyderabad today at 7 PM.

Australia won the first match of the 3-match T20I series in Mohali by 4 wickets. The Indian team responded to this in the 2nd match held yesterday in Nagpur. Chasing a target of 91 runs in this match which was played in 8 overs due to rain, the Indian team won by 6 wickets with 4 balls to spare.

The win tied the 3-game series at 1-1. So who will win the series? The final match to decide will take place tonight in Hyderabad. Rohit Sharma played brilliantly in the 2nd game despite having fewer overs. Another great innings could emerge from him as he was instrumental in the team’s victory with a 20-ball 46. Similarly, Dinesh Karthik, who drove the first two balls for sixes and fours in the last over with 9 runs needed from 6 balls, may strike once again.

At the same time Axar Patel performed brilliantly in bowling. Bowling 2 overs, he conceded 13 runs and took 2 wickets. Axar Patel’s performance was the big difference between the two teams. Bumrah also bowled a few yorkers with finesse. Only Harshal Patel and Yuvendra Chahal are stumbling. With the T20 World Cup approaching, they are in dire straits to produce top-level performances.