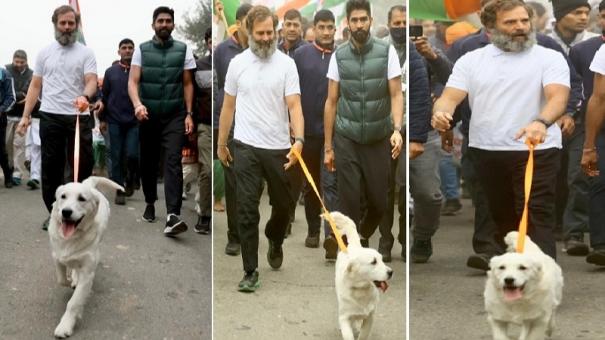 Chandigarh: Former Congress president and Wayanad MP Rahul Gandhi is on the Indian Unity Yatra. After 100 days, his pilgrimage is currently taking place in Haryana. Rahul Gandhi’s yatra is regularly joined by some celebrity on a daily basis.

Sometimes karate with the kids, riding a bicycle, cuddling with the pets that come on the pilgrimage and some other interesting things happen on the side.

Rahul Gandhi was joined by his sister Priyanka Gandhi Vadra’s pet dog Luna in the Yatra in Haryana this morning. The Congress party shared the information on its Twitter page. It read, “Luna has watched patiently for days as you eagerly supported the many pets that came into the field during your pilgrimage. Today, you decided enough was enough and that’s it for your pilgrimage. Luna is a little jealous. She doesn’t want to share your love with anyone. We get it, Luna!” posted that.

It is to be noted that even though Luna Priyanka is the darling of the house, Rahul is adored. Sharing the picture, Priyanka Gandhi jokingly posted, “Luna has been kidnapped.”

Last September 7, Rahul Gandhi started the India Unity Yatra in Kanyakumari district of Tamil Nadu. The Yatra has crossed the states of Tamil Nadu, Karnataka, Kerala, Andhra Pradesh, Telangana, Madhya Pradesh, Maharashtra, Rajasthan and Haryana and entered Delhi on its 108th day. Entering Haryana on January 5, the Yatra travels through Punjab and ends at Srinagar in Jammu and Kashmir on the 26th.