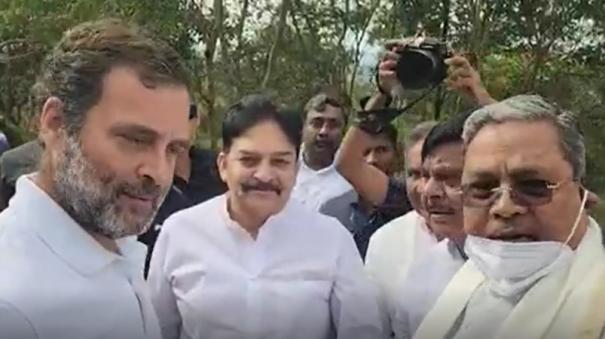 Congress leader Rahul Gandhi on September 7 started the India Unity Tour from Kanyakumari to Kashmir. 3,500 km across 12 states in a total of 150 days. This trek is done for distance. This yatra, which has been going on in Tamil Nadu and Kerala so far, has reached Karnataka on its 23rd day. Congress leaders including former Chief Minister Siddaramaiah welcomed Rahul Gandhi, who has come to Karnataka for a yatra to be held in a BJP-ruled state for the first time, at the state border.

This yatra will play a very important role in maintaining the name of Congress as a strong opposition party in Karnataka. Also, former Chief Minister Siddaramaiah and State Congress Working Committee President TK Shivakumar are expected to help both prove their mettle. The State Congress has constituted 18 committees to manage the Yatra programmes. The party’s state president DK Shivakumar told the party MLAs that 5000 people should participate in the yatra in each assembly constituency.

Meanwhile, posters welcoming Rahul Gandhi and Congress leaders to welcome the Bharat Jodo Yatra in the state have been torn down.

Recently, when asked about Rahul Gandhi’s Bharat Jodo Yatra, Chief Minister Basavaraj Bombay said, “Rahul can come and go in Karnataka. In the last 2019 elections, all the places he visited were lotus blossoms.”