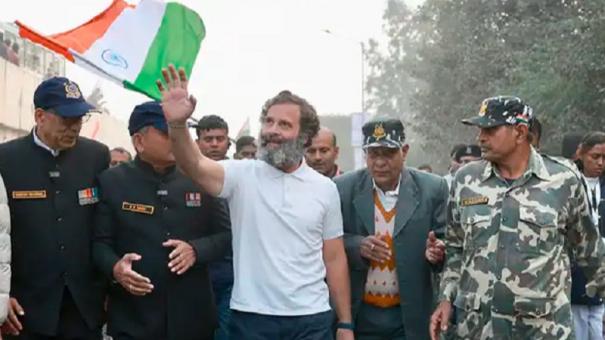 New Delhi: During the India Unity Yatra in Kashmir, Congress M.P. Reports have surfaced that the central intelligence and security agencies have warned Rahul Gandhi to avoid walking in a few places and go by vehicle. Also the security aspects of Rahul Gandhi’s travel route and his overnight accommodation are being looked into, reports said.

Rahul Gandhi will enter Luckanpur on January 19. Stay there for the night and leave for Kathua the next morning. Then stays at Chatwal for the night. On 21st January morning from Hiranagar to Duker Haveli. Traveling from Vijaypur to Satwari on January 22.

On January 25, Rahul Gandhi will hoist the national flag at Banihal in Kashmir, then travel through Anantnag district and reach Srinagar in 2 days. Security agencies have apparently instructed that only a very limited number of people accompany Rahul during his visit to Srinagar.

Rahul Gandhi has been advised to go by car instead of walking as some of the roads are known to be tense.

On January 30, a meeting of opposition parties will be held in Srinagar under the leadership of Rahul Gandhi. Rahul Gandhi completes Indian Unity Yatra by participating in it.

Senior Congress leader Jairam Ramesh said that in this meeting Aam Aadmi Party, Chandrasekhara Rao’s Bharat Rashtra Samithi, YSR Congress, Biju Janata Dal, Akali Dal, AIADMK and Owaisi’s AIMIM should not be invited. It is in this context that the instructions regarding Rahul’s safety have been released.