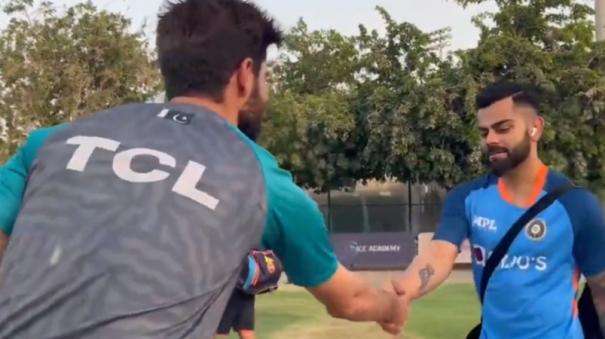 Dubai: Pakistan’s young fast bowler Shahin Afridi has said that he is praying for former Indian cricket team captain Virat Kohli to return to form. Afridi said this when both of them met at the Dubai Cricket Stadium.

Six teams, including India and Pakistan, are currently camping in the UAE to play in the Asia Cup series. Teams India and Pakistan will play a multi-Test series tomorrow and the day after tomorrow. Kohli has been included in the Indian team for this series. At the same time, Afridi was not included in the Pakistan team. He is out due to injury. However, he is traveling with the team.

It is in this situation that both of them have met during training on the field. Kohli inquired about Afridi’s injury. Afridi has also responded to it. After that he said this.

“I pray you return to form. We want to see you in good form.” This video was shared by the Pakistan Cricket Board. It is gaining global attention. It is noteworthy that Kohli has not batted properly in the last few matches. There have been voices for and against in the cricketing world regarding his form.

Players like Rishabh Pant, KL Rahul and Chahal have also spoken to Afridi. Afridi apparently talked about his ‘same hand’ sixes in his conversation with Pant.

Video link of discussion between the two…