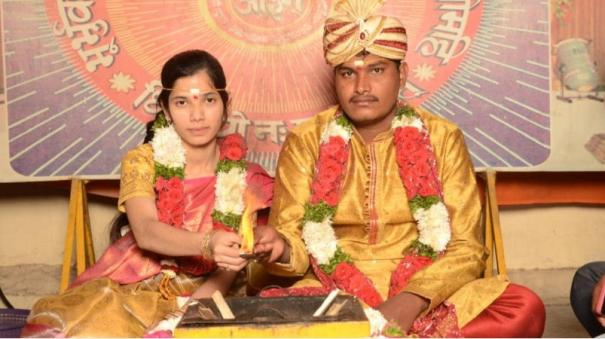 Hyderabad: The brother, who could not bear to see his sister marry someone of a different religion, attacked and killed the new groom with an iron bar in the middle of the road. The public then gathered and filmed with cell phones without stopping the attack. In return for seeking help from inhumane men, the loving wife bursts into tears as if something else might have been done to prevent the murder.

Nagaraju hails from Marpalli village in Rangareddy district near Hyderabad. He and Syed Ashrin Sultana from the neighboring village of Kanpur have been in love for the last 7 years. Their love was strongly opposed at the Sultana’s house. However, the couple got married last January.

Meanwhile, Nagaraju got a job as a salesman in a famous car company in Hyderabad. After getting married, the two went to Visakhapatnam and lived there for 2 months. They settled in Hyderabad for the last 10 days as there was no problem. The Sultan’s brother Syed Mobin Ahmed, and his friend Masood Ahmed, who came to know about this, came across the Sultan and her husband on a bike in the Sururnagar area last Wednesday.

Later, Nagaraju was attacked with an iron bar. The Sultana who came to block was pushed down. The Sultana, who saw her husband being brutally beaten in front of her eyes, begged him to hold the feet of the assembled public and save her. But, no one came forward to save. Some even filmed the murder on their cell phones. Nagaraju was hit by an iron bar for about 10 minutes and his skull was broken and he bled to death on the spot.

Sultana, who was interviewed about the incident, lamented, “If I had done something else in return for believing in inhumans, I might have saved my husband.”

Sururnagar police arrested both the accused in the murder. The day before yesterday night when Nagaraju’s body was autopsied and handed over to relatives they refused to buy and got involved in a road blockade.

A total of 144 restraining orders were issued in Surur for fear of causing religious unrest. Nagaraju’s body was recovered by relatives after LP Nagar Police Commissioner Sunpreet Singh assured them that the killers would be given the death penalty as per law. Nagaraju’s funeral took place yesterday with heavy police security.