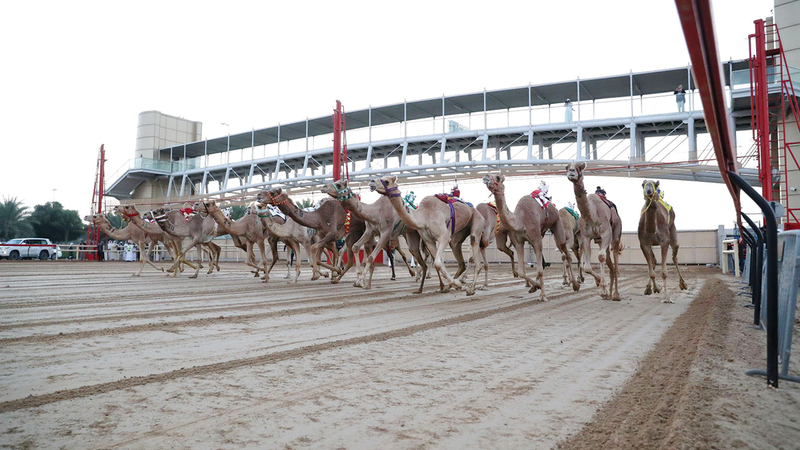 The two mounts, “Injaz” and “Metab”, starred in the camel competitions of the sons of the tribes at the age of Al-Hol and Zamoul within the Dubai Crown Prince Camel Festival 2023, as 905 mounts competed over 28 runs, 16 in the morning period, and the evening period witnessed 12 runs for a distance of eight kilometers.

And he won the title of the first rounds of the evening period, which was dedicated to the locals, the slogan of Suhail Al-Ramli Muhammad Al-Amri, who presented “Achievement” on top with a time of 12:30:4 minutes, and the winner of the Emirates Sword in the final of Al-Marmoum 2022 “Zureij”, owned by Faraj Ali bin Hamouda Al-Dhaheri, won the lead in the half. The second is for the squint, with a timing of 12:33:2 minutes.

And “Metab”, owned by Muhammad Hamad Kardous Al-Amiri, succeeded in settling the summit of the third round for Al-Zamoul Al-Mahlat, after recording a time of 12:45:0 minutes. 40:7 min.

On the other hand, the morning period witnessed the establishment of 16 challenges in the year of Al-Hol and Al-Zamoul to cross-breed the sons of the tribes for a distance of eight kilometers, of which 10 runs were allocated to the production camel, as “Raghad” presented the slogan of Saeed Rashid Ghadeer Al-Ketbi at the forefront of the main challenge for the cross-country local production with a time of 12:37:6 minutes. Wadha, owned by Al-Mothah, Khuza’ Al-Mothah Al-Amiri, won the title in the main challenge for Al-Hawl Al-Mahgnat Productions, recording a time of 12:46:2 minutes.

And “Shadid”, owned by Abdul Wahid Khaza’ Al-Moth Al-Harki Al-Amiri, won the lead in the third round for Al-Zamoul Al-Mahaliyat for production, after he reached the finish line in a time of 12:47:2 minutes. For Zamoul Al-Mahgnat Productions, with a time of 12:44:4 minutes, and “Rital”, Malak Saeed Manana Ghadir Ajtbi, won the best timing in the morning runs by winning the lead in the tenth round of Al-Hawl Al-Mahgnat Productions with a time of 12:35:3 minutes.

On a related level, Al-Marmoum Square is witnessing the conclusion of the camel participation of Their Highnesses Sheikhs in the Dubai Crown Prince Camel Festival 2023, through the challenges of Hawl and Zamoul, which will be held over 27 rounds, including 14 in the morning period, and 13 in the evening, and the race distance will be eight kilometers.