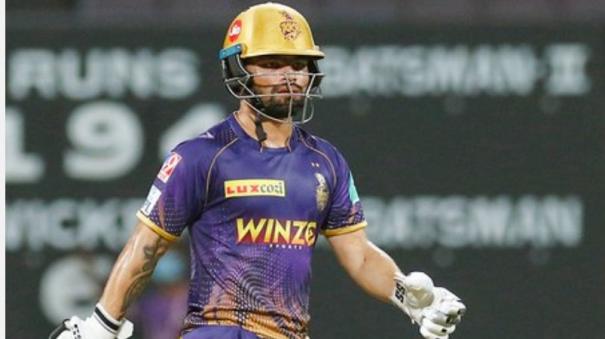 Mumbai: Ring Singh, a young left-handed batsman, has made a tremendous impact for Kolkata in the current IPL season. Let’s look at the path he traversed on the cricket field as an injury, Dad’s suffering.

Ringo, who played immensely in the match against Lucknow, was left staring at the field in grief at not being able to help the team win. He is 24 years old and was born and raised in Uttar Pradesh. He plays domestic cricket for the Uttar Pradesh team. His father, Kansandra Singh, has been working for an LPG cylinder distribution company. He has decided to do what he can to help his family who are suffering from financial problems. However, he is still interested in cricket.

Ringo has continued to play local cricket for his home state team. By 2017 the Punjab team had bought him at auction. He had amassed 953 runs in the 2018-19 Ranji Trophy series.

Ringo subsequently joined the Kolkata team in 2018. He has so far played in a total of 17 IPL matches and scored 251 runs. He has scored 174 runs in 7 matches in the current season. Also known as the best fielder. His strike rate is 148.72.

Ring had missed the last 2021 IPL season due to injury. In this case, the ring is talking about the path that came last. “I had a joint injury during the 2021 Vijay Hazare series. My father did not eat for 2 to 3 days because I was injured. Our family relied solely on me. I was sad then too. But I knew I would recover quickly from the injury. I’m a little more confident.

The fact that I was unable to play cricket due to injury gave me anxiety. My whole thinking when I got injured was just around IPL cricket. Because I was told it would take up to seven months to return to the field. I am now back after surgery. “