Intense battles in Severodonetsk… and Britain: the Russians advance south 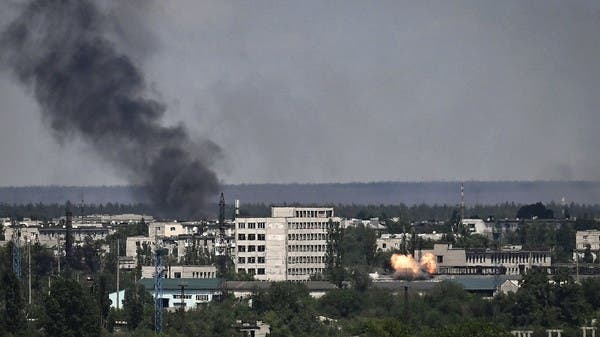 The battles continued, today, Tuesday, for control of the strategic city of Severodonetsk in eastern Ukraine, which is under intense Russian bombardment and where the situation is developing “every hour”, according to Kyiv, which, along with Washington, accused Russia of practicing “blackmail” in the issue of wheat exports.

British intelligence also said that the Russian army is facing difficulties in the “Pupasna” axis, adding that “Russian bombing targets the vicinity of “Izyum” in an attempt to advance from the northern side.”

This comes while President Volodymyr Zelensky confirmed that Ukrainian forces are still holed up in their positions in Severodonetsk, and that fierce fighting continues in the city’s streets, while the Russian army continues to mobilize additional forces in the Donbass axis.

Zelensky also thanked British Prime Minister Boris Johnson for standing by the Ukrainian people and his willingness to provide his country with appropriate weapons.

Zelensky had confirmed that his country’s situation would be difficult in the event of losing the Battle of Donbass. In an interview with the media, the Ukrainian president added that the situation in eastern Ukraine is dangerous, recognizing Russia’s progress in Donbass.

For his part, the governor of Lugansk region confirmed that the Ukrainian forces had seriously retreated in the battle of Severodonetsk, while Moscow indicated that its military operations in eastern Ukraine would continue until the elements it described as Nazis on the Russian border were neutralized.

Ukrainian Deputy Defense Minister Yury Sak stressed on Monday that if Russian President Vladimir Putin is not stopped in Ukraine, all countries in the region are threatened. He also said in an interview with “Al Arabiya”, that Kyiv demanded Western weapons to respond to the Russian artillery.

“We do not plan to attack Russian territory,” he said, adding, “We have many Russian targets to strike inside our territory.” He also said, “We suffer from a shortage of soldiers and heavy weapons,” referring to the Russian superiority in this.