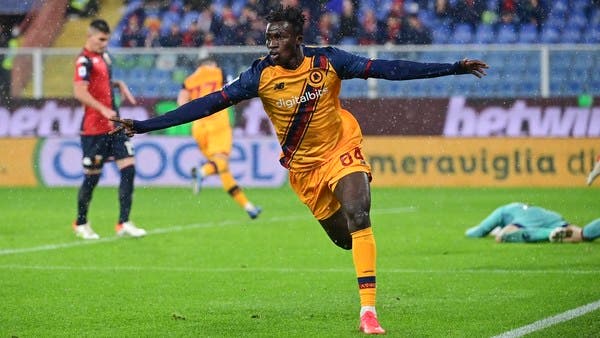 The Napoli team missed the opportunity to be at the top of the Italian football league, after falling into the trap of losing its host Inter Milan 2-3 on Sunday in the thirteenth round of the Italian Football League, which also witnessed a draw with Sassuolo with Cagliari 2-2 and Venezia win over Bologna 1 – Zero, Sampdoria beat Salernitana 2-0, and Roma beat Genoa 2-0.

Inter Milan’s goals were scored by Hakan Chalhanoglu in the 25th minute from a penalty kick, Ivan Perisic in the 44th minute, and Lautaro Martinez in the 61st minute, while Napoli’s goals were scored by Piotr Zielinsky and Dries Mertens in the 17th and 79th minutes. Napoli’s balance stopped at 32 points at the top of the standings, with a goal difference against Milan, while Inter Milan raised its score to 28 points in third place.

The start of the match came quickly from both sides, as they exchanged attacks in search of a goal to score, but the attacks did not pose a real danger to the two goals in the first quarter of the match.

And in the 17th minute, Napoli scored the goal when Lorenzo Insigne passed the ball to Peter Zielinsky inside the penalty area to hit a powerful ball that hugged the net. After the goal, Inter Milan imposed control of the match in search of an equalizer, which led to the Napoli players retreating to their midfield to maintain their lead while relying on counter-attacks.

In the 23rd minute, after returning to the video assistant referee technology, the referee awarded a penalty kick to Inter Milan when Nicolo Barilla hit a powerful ball that hit the hand of Kalidou Koulibaly, Napoli defender, inside the penalty area, and Hakan Calhanoglu successfully shot it into the goal, recording the first goal for Inter Milan in the minute. 25. Inter Milan intensified its offensive attempts in search of a second goal before the end of the match, and tried to take advantage of the state of confusion that Napoli players suffered after the goal, but failed to form any danger on the goal to limit the play to the midfield. In the 44th minute, Inter Milan scored the second goal when Calhanoglu played the ball from a corner kick into the penalty area, which Ivan Perisic rose to and met it with an elaborate header into the goal.

The remaining time of the first half passed without anything new, before the referee blew the whistle at the end, with Inter Milan advancing 2 – 1. With the beginning of the second half, the game became a controversy between the two teams, but without a real danger to the two goals.

And in the 61st minute, Inter Milan scored the third goal when Joaquin Correa passed the ball to Lautaro Martinez inside the penalty area to hit a powerful ball that hugged the net. Inter Milan’s offensive attempts, which almost resulted in the fourth goal, continued when Perisic penetrated the ball from the left side and hit a powerful ground ball that was blocked by Ospina. After that attack, Napoli imposed control of the match in an attempt to reduce the difference, and was able to reduce the difference in the 79th minute when Dries Mertens hit a powerful ball that touched the fingers of Inter Milan goalkeeper Samir Handanovic, before completing its way into the net. Napoli’s offensive pressure continued in the last minutes of the match in search of an equalizer, but it failed to do so, so the referee blew the whistle at the end of the match, with Inter Milan winning 3-2.

In another match, Roma beat Genoa with two clean goals, scored by Felix Avena Jian in the 82nd and fourth minutes of overtime for the match. Roma raised its score to 22 points in fifth place, and Genoa’s balance stopped at nine points in eighteenth place.