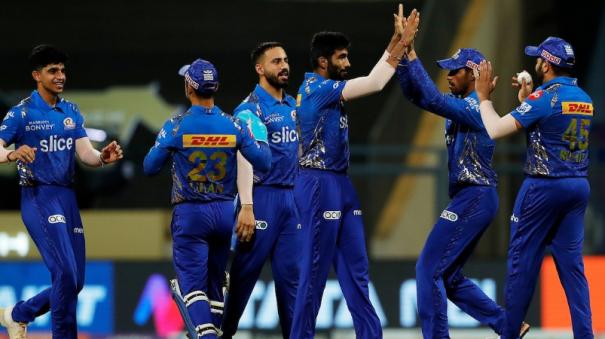 வான்கடேChennai Super Kings and Mumbai Indians play in the 59th league match of the current IPL season at Wankhede Stadium. Chennai lost the toss and elected to bat first. Chennai were all-out for just 97 runs. The reason for this is that Chennai snatched Malamalavena wickets. The first ball faced by Chennai player Devon Conway was declared out by the umpire in LBW mode.

But Conway was unable to make the DRS decision to reconsider the arbitrator’s decision. Because, he was denied that option due to power outage in the ground. So he left the field. Of those who came after, only Dhoni scored a maximum of 36 runs. Others were coming and going in short runs. Thus, Chennai was all out for 97 runs. For Mumbai, Daniel Sams took 3 wickets and Riley Meredith and Kumar Karthikeyan took 2 wickets each.

The Mumbai team faced a wicket decline as they fielded a simple target. Ishant Kishan struck for 6 in the first over. Rohit Sharma, who started the innings following him, also took the wicket for 18 runs. Debutants Tristan Stubbs and Daniel Sams followed, but Mukesh Chaudhary lost the wicket, but Tilak Verma kept the momentum going. He assisted with 34 runs from unbeaten till the last. He was joined by Hrithik Shokeen (18) and Tim David (16). Mukesh Chaudhary took a maximum of three wickets for Chennai.

This is the third win for the Mumbai Indians in the current IPL series. Mumbai have already been knocked out of the play-off round and will play two more matches. At the same time, with today’s defeat, Chennai team has been eliminated from the play-off round.