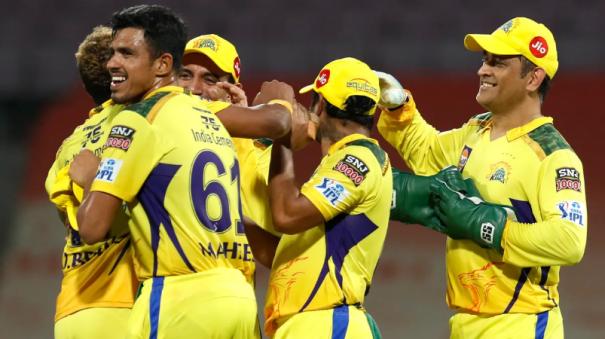 Chennai Super Kings and Delhi Capitals played in the 55th league match of the current IPL season. Delhi captain Rishabh Bandh, who won the toss in the match, chose to bowl. Chennai team batted first. CSK lost six wickets at the end of 20 overs and scored 208 runs. Chased the target of 209 runs to win.

Subsequently Rishabh Bandh and Mitchell Marsh formed a petty partnership. Marsh lost the wicket in Moin Ali bowling though. Delhi then lost wickets in a row at regular intervals. Bandh, Rifle Patel, Akshar Patel, Powell, Kuldeep Yadav, Shardul Thakur and Khalil Ahmed were out. Delhi lost all their wickets at the end of 17.4 overs and scored 117 runs. As a result, Chennai team won by 91 runs.

Devon Conway and Rudraj Kejriwal were the opening batsmen. Both added 110 runs for the first wicket. Rudraj was out for 41 runs.

Sivam Dube and Conway, who followed, formed a partnership of 59 runs. Conway was out for 87 runs. Dubey, 32, was out. Rayudu, Moin Ali and Uthappa were out for single digits. Captain Dhoni had scored 21 off 8 balls. Devon Conway won the Man of the Match award in this match.

There was a problem with this match. The team was isolated because some of the Delhi team had a corona infection. The match took place after it was confirmed that there was no infection. Delhi captain Rishabh Bandh spoke on the occasion.