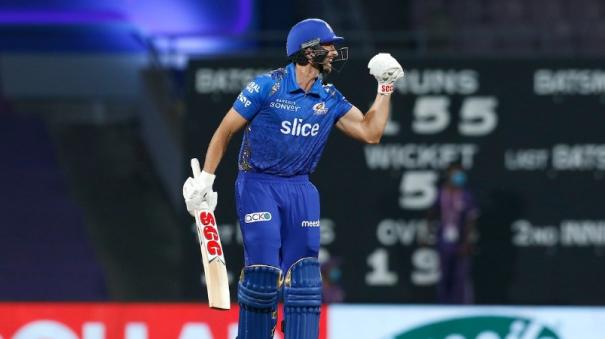 Mumbai: Mumbai won the match by 5 wickets against Rajasthan.

Rajasthan Royals and Mumbai Indians played in the 44th league match of the current IPL season. Mumbai captain Rohit Sharma won the toss and elected to bowl. Butler and Devdhat Padikkal were the opening batsmen for Rajasthan. Rajasthan lost the first wicket by the end of the Powerplay over. Padikkal was out for 15 runs.

Rajasthan captain Sanju Samson followed with 16 off 7 balls. Butler and Mitchell, who were on the field, stumbled to add a run. In the middle overs, Rajasthan scored a total of 62 runs. Added 56 runs in the last five overs. Butler hit four sixes in a row in the 16th over. He was out for 67 runs.

Aswin, 21 off 9 balls. At the end of 20 overs, Rajasthan scored 158 runs for the loss of 6 wickets. Meredith and Hrithik took 2 wickets each for Mumbai. Daniel Sams and Karthikeyan were each taking one wicket each.

Following this, Rohit Sharma and Ishant Kishan co-gave Mumbai a 159-run victory. Ravichandran Aswin bowled Rohit Sharma in the 3rd over, who was expected to stand out. He built the walk in 2 runs. Suryakumar Yadav, who came next, joined hands with Ishan Kishan. But Ishant Kishan returned to the pavilion in the 6th over with 26 runs. Following this, Tilak Verma and Suryakumar Yadav together increased the team’s score.