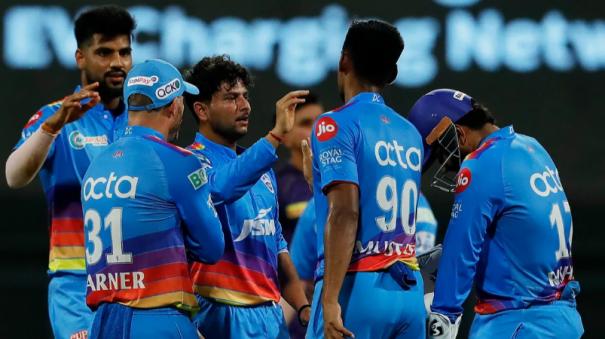 Mumbai: Kolkata Knight Riders got off to a flying start with Delhi spinner Kuldeep Yadav in the spin. Delhi need 147 runs to win.

The Delhi Capitals and Kolkata Knight Riders play in the 41st league match of the current IPL season. Delhi captain Rishabh Bandh, who won the toss in the match, opted for bowling. Kolkata batted first. Venkatesh Iyer and Aaron Finch took the field for the team. Both lost their wickets in the Powerplay overs.

Of the three batsmen who followed, the other two (Baba Indrajith and Sunil Narine) returned to the pavilion with the exception of captain Shreyas Iyer. Kolkata lost 4 wickets for 35 runs. Shreyas, however, formed an alliance with Nitish Rana at bat. The two formed a partnership of 48 runs.

Shreyas lost the wicket for 42 runs. Nitish Rana, who played at the other end, played till the last over. He was dismissed for 57 off the fourth ball of the 20th over. Ring Singh, 23 off 16 balls, was unbeaten. At the end of 20 overs, Kolkata scored 146 runs for the loss of 9 wickets.