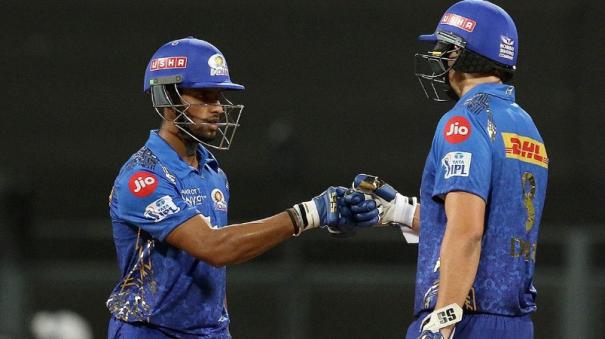 The league round matches are reaching the final stage in the current IPL season. The Delhi Capitals and Mumbai Indians played their last league match today. With Mumbai already out of the play-off round, the Delhi team was forced to win today’s match to qualify for the play-off round.

But the Mumbai team emptied Delhi’s play-off dream a little from the first few seconds. Another opener Ishant Kishan showed responsible play, though Rohit Sharma failed to lend a hand in the opening pair for the Mumbai Indians, who chased down a target of 160. Although he started as a Slovak, he showed action at one point, taking 48 off 35 balls and snatching the wicket.

Dewalt Privice, who was on his side, played patiently and added 37 runs. Tilak Verma and Tim David followed suit and led the team to victory. Tim David had a short period of time but at that time he blasted 4 sixes and showed fireworks. He scored 34 off 11 balls while Tilak Verma added 21 runs. By the time the two were out, the Mumbai Indians needed 5 runs in the last over to win. Khalil Ahmed, who bowled the last over, bowled the first ball of the innings, followed by a free hit by Ramandeep Singh to give the team the lead. Mumbai, who started the series with a loss, have ended with a win. For Delhi, Anrich Nordje and Shardul Tagore took two wickets each.

Delhi Capitals innings: Mumbai Indians captain Rohit Sharma won the toss and elected to bowl Accordingly, the Delhi team was co-started by Prithviraj Shah and David Warner. The pair were split by Daniel Sams in the 3rd over. Thus, Mitchell Marsh came on the field to get David Warner out for 5 runs. At the speed that came, Bumra gave the ball to the catch and tied the walk out without taking any run. Prithviraj Shah also returned to the pavilion with 24 runs after giving up a catch in another over by Bumra. The next Sarfraz Khan did not stand.

Rishabh Pandey and Rowman Powell chased down the Mumbai bowlers on all fours, believing that taking more wickets would worsen the team’s situation. Thus the team’s score went up. Rishabh Pandey, who was showing responsible play, was bowled out for 39 by Ramandeep Singh. Following that, Rowman Powell was also bowled out for 43. Shardul Thakur, who came next, was out for 4, with Delhi losing seven wickets for 159 in the allotted 20 overs. Akshar Patel (19) and Kuldeep Yadav (1) were on the field.