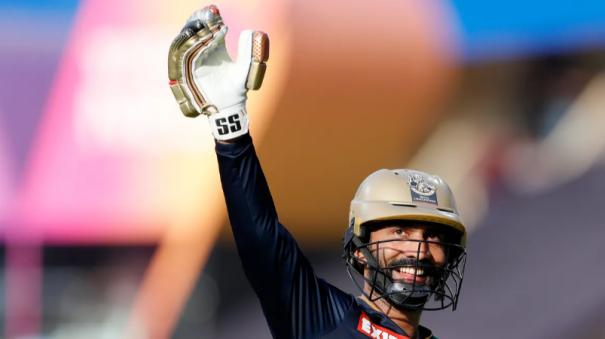 Mumbai: Dinesh Karthik, who played in action for Royal Challengers Bangalore, was unbeaten on 30 off 8 balls. Virat Kohli bowed in front of him watching his match.

Sunrisers Hyderabad and RCB played in the 54th league match of the current IPL season. RCB won the toss and elected to bat first. Duplessis, Rajat Pattidhar, Maxwell and Dinesh Karthik’s were the main reason for the team’s success. As a result, the team scored 192 runs. RCB also won the match by 67 runs.

Dinesh Karthik scored 30 off just 8 balls. He had 4 sixes and 1 four in his innings. His strike rate is 375. He has played 27 matches and scored 274 runs in the current season. He hit three sixes and one four in the last four balls of the last over of the match.

Dinesh Karthik returned to the dressing room after the first innings. Then Virat Kohli came in front of him and bowed his head in admiration. Also, the players and coaches of the Bangalore team praised Dinesh Karthik for his excellent performance.