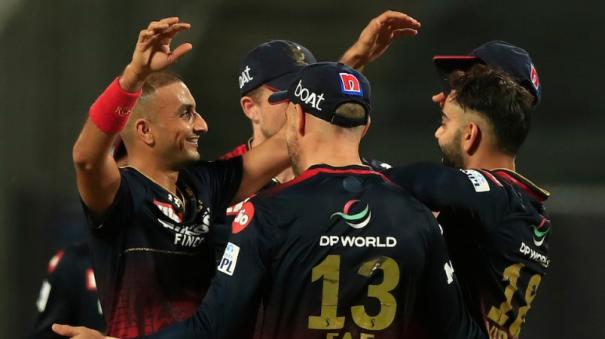 The opening partnership laid a good foundation for Chennai, who chased down a target of 174 runs. Rudraj Kejriwal and Devon Conway co-power play lasted till the end. Rudraj Kejriwal took the first wicket for 28 runs when he passed 50 in 6 overs. Robin Uthappa was out for a run in the next few minutes and Chennai were shocked to see Ambati Roy end the innings with 10 runs.

Conway and Moin Ali joined the Chennai team for a few overs as they stumbled after losing three wickets before scoring 75 runs. Conway was dismissed for 56 in the 15th over and Moin Ali for 34 in the 17th over. Only Twain Pretorius was able to touch the double digit and all the other backline players were coming and going with a single digit run.

In the final 20 overs, Chennai lost 8 wickets and scored only 160 runs. Thus embracing defeat by a margin of 13 runs. For Bangalore, Herschelle Patel top-scored with 3 wickets and Maxwell took 2 wickets.

Bangalore innings: Chennai captain Dhoni, who won the toss, chose to bowl. Virat Kohli and Duplessis were the opening batsmen for Bangalore. The two formed a 62-run partnership for the first wicket.

Duplessis was dismissed for 38 off 22 balls. Subsequently Maxwell and the goalie lost their wickets in succession. However, Rajat Pattidar and Mahipal Lomror partnered for 44 runs. It became a key ally for that team. Pattidar was out for 21 off 15 balls. Lomrore was out for 42 off 27 balls.

Dinesh Karthik was unbeaten on 26 off 17 balls till the final. At the end of 20 overs, Bangalore scored 173 runs for the loss of 8 wickets. Mahesh Dixhana (3 wickets), Moin Ali (2 wickets) and Pretorius (1 wicket) were the main contributors for Chennai.