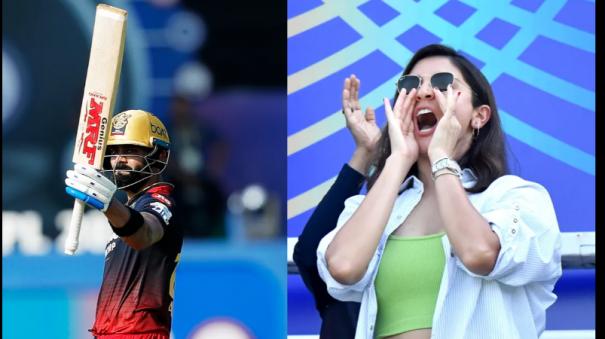 Gujarat and Bangalore are playing their 43rd league match of the current season. Bangalore, who batted first in the match, scored 170 for the loss of 6 wickets. The team has been batting poorly for the last few matches. Virat Kohli’s game was the solution to this problem.

41 *, 12, 5, 48, 1, 12, 0, 0, 9 These are the runs Virat Kohli has scored in previous matches in the current season. There was a lot of talk about his poor batting form. Indian cricket board chairman Ganguly said, “Goalie will definitely return to form.” What he said has paid off.

He scored 58 off 53 balls in today’s match. The goalie scored a half-century in the 13th over of the first innings. His wife and actress Anushka Sharma had come to the ground to watch the match live. He cheered as the goalie recorded a fifty. That video is currently attracting attention. Goli – Anushka couple has a baby girl named Wamika.