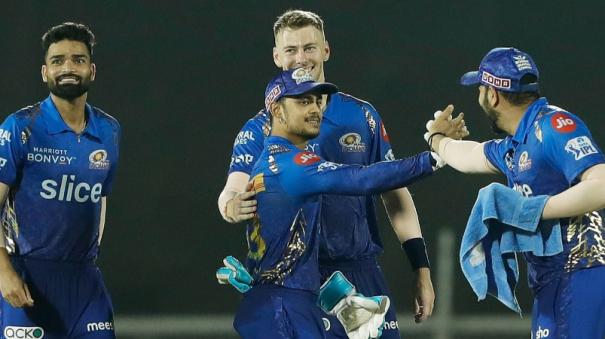 Mumbai Indians have recorded their second win of the IPL season by beating Gujarat.

Mumbai Indians and Gujarat Titans clashed in the 51st league match of the current IPL season. Gujarat captain Hardik Pandya won the toss and elected to bowl first. Batting accordingly, the opening pair gave a good start to the Mumbai team this time. Rohit Sharma started the innings aggressively and smashed Gujarat bowling in the power play. Similarly, Ishaan Kishan played his part in the action. Rohit (43), Ishant Kishan (45) and middle-order batsman Tim David (44) put on 177 for the loss of six wickets in the allotted 20 overs. Rashid Khan took two wickets for Gujarat.

Gujarat’s Chapman Gill returned to form after chasing 178 runs. Thus the opening pair could not be separated by the Mumbai bowlers. The Mumbai bowlers took the first wicket as the team scored 106 runs. Chupman Gill, who had scored 52, was dismissed by Murugan Aswin. In the first ball of the 13th over, Murugan Ashwin dismissed another opener Viruthiman Saha in the last ball of the innings.

This decline was to the detriment of the Gujarat team. In the next over, captain Pandya took 24 runs but missed the last ball of the innings. With Mumbai needing 6 runs to win the last ball, Mumbai bowler Daniel Sams cleverly controlled the bowling. Sams threw effectively, especially in the last over. He controlled the Gujarat batsmen by throwing a slow ball when they needed 9 runs for victory in 6 balls. With his help, Mumbai won the last ball by 5 runs.