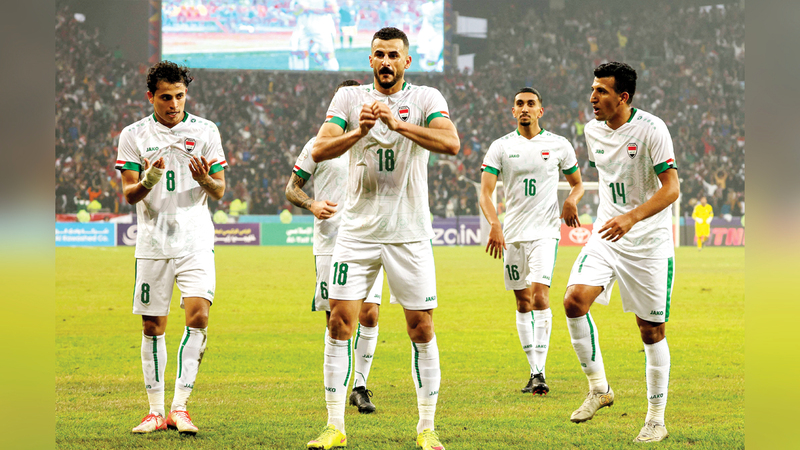 Iraq qualified for the 25th Arabian Gulf Cup final, after defeating Qatar with two goals to one in the semi-finals, yesterday, at Basra International Stadium, in the presence of more than 60,000 spectators, and set a date in the final that will be held the day after tomorrow with its Omani counterpart, who beat the Bahraini team yesterday ( Defending champion) with a goal without a response scored by the player Jamil Al-Yahmadi. The “Lions of Mesopotamia” is looking forward to achieving the dream of winning the title for the fourth time in its history, after previously winning the cup in 1988, 1984 and 1979. Iraq and Qatar presented a strong match, as the large public presence contributed to the superiority of the Iraqi team at all times of the meeting, and at the same time the Qatari team played at a good level and almost A tie in the second half and the match heads to overtime.

The Iraqi national team played the same way it played the group stage matches by pressing the opponent in the first 10 minutes, as the “Mesopotamia Lions” dominated the midfield, but without danger to the Qatar national team, while the first 20 minutes witnessed tension from the two teams and the multiplicity of mistakes committed by The players, as the Chinese referee, Ma Ning, issued the yellow card four times to each of the Iraqi Muhammad Ali Abboud, Ismail Muhammad and Ahmed Aladdin of the Qatar national team, along with the Portuguese “Al Annabi” coach Bruno Pinheiro.

The Iraqi pressure resulted in Ibrahim Baish scoring the first goal for “Usood Al-Rafidain” after Amir Al-Ammari played a direct free kick, and Mustafa Nazim met it with his head, and Qatar goalkeeper Mishaal Barshim tackled it, before Baish completed it in the goal (19).

The Qatar national team entered the atmosphere of the meeting after the goal, after Khaled Munir, Ali Asad and Ahmed Alaa were active in leading the “Al-Anabi” attacks, and Munir hit a dangerous ball that was pushed away by the Iraqi defense (23).

In the 29th minute, the Qatari team scored the first goal, after the goalkeeper of “Lions of Mesopotamia” Jalal Hassan made a mistake in deflecting a cross played by Ahmed Alaa, and the ball reached Amr Abdel Fattah, who fired it into the goal.

The owner of the land regained control of the midfield, while Al-Annabi relied on counter-attacks, and the Iraqi national team took advantage of a fatal line from the Qatari defense, and the ball reached Ayman Hussein, who hit the ball, touching the Qatari defender and entering the goal (43).

In the second half, the Qatari team entered strongly and almost scored the second goal from an organized attack that reached Muhammad Waad Al-Bayati, so he passed the ball to Amr Abdel-Fattah, who hit a powerful ball that bounced off the crossbar (49) and reached Al-Bayati, so he hit the ball in the hands of goalkeeper Jalal Hassan.

For his part, Qatar goalkeeper Meshaal Barshim excelled in blocking two chances achieved by Iraq to add the first goal, the first when Dhurgham Ismail hit a powerful ball from a direct free kick that Barshim blocked and pushed it away from the “Al-Annabi” defense, then the ball reached Ayman Hussein, who played a ball with his head and saved The Qatari goalkeeper took the ball away to a corner kick (74).

Excitement rose in the last 10 minutes of the match after the Qatar national team pressed to score the equalizer, but the brilliance of Iraq’s defense contributed to the team maintaining its progress and the “Mesopotamia Lions” achieving victory and qualifying for the final.