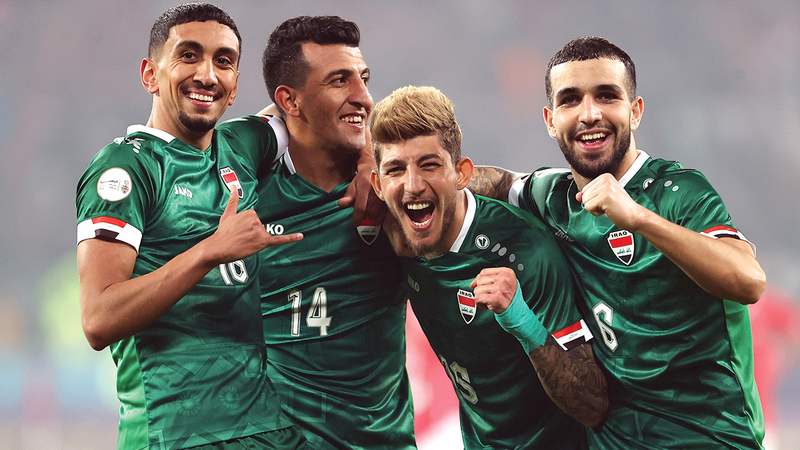 The teams of Iraq and Oman reserved their seats in the semi-final round for the first group of the “Gulf 25” tournament, at the expense of Yemen and Saudi Arabia, who were called to the tournament from the group stage stage. Yesterday, the “Lions of Mesopotamia” achieved a big victory over the Yemeni national team, with five goals for free, at Basra Stadium, in front of 65,000 spectators who filled the stadium in a global atmosphere.

Mustafa Nazim was able to give his team the lead in the 40th minute, after several attempts by the Iraqi team to reach the goal of goalkeeper Muhammad Fatah Aman, so that the first half ended with that result.

In the second half, the “Lions of Mesopotamia” benefited from the lack of physical performance in the Yemeni national team, which was unable to keep up with the Iraqis, who scored four consecutive goals, which were scored by Amjad Atwan (64), and Ayman Hussein for two goals (74 and 75), Hussein Ali (88). . With this result, Iraq crosses into the semi-finals at the top of its group, after it scored seven points, ahead of Oman, who has the same balance of points, but is superior by goal difference, awaiting the second-place finisher in the second group, which is contested by the UAE, Kuwait and Qatar teams. In the second match, the Omani national team was able to overcome the obstacle of the young Al-Akhdar with great difficulty by winning 2-1 after a match in which Al-Ahmar suffered, in front of the Saudi team, which dominated most of the match, and was the closest to victory had it not been for the lack of experience. Al-Mundhir Al-Alawi was able to open the registration door at the 34th minute, investing in Salah Al-Yahya’i’s cross.

However, the Saudi national team responded quickly, and Turki Al-Ammar equalized for him in the 41st minute, after a cross he received from Simhan Al-Ammar.

The Omanis, despite Saudi Arabia’s advantage in the second half, were able to score the winning goal eight minutes before the end, with a long-range missile fired by Hareb Al-Saadi.