Is Kohli really a ‘world class’ player? – Doubt as the front foot ball is bowled on the back foot! 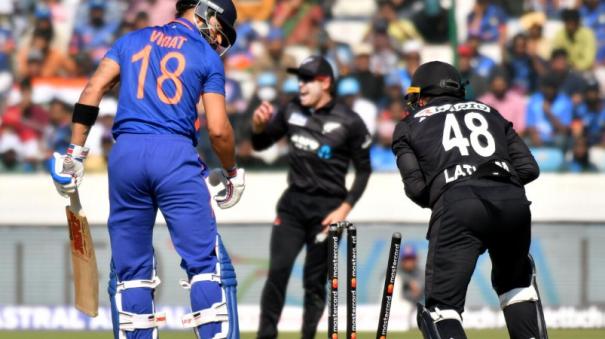 Australia’s leg spinner Adam Champa has defeated him like this. Kohli is also out in the IPL series like he was out yesterday. So the question arises whether we can compare him with world class players like Viv Richards, Sachin Tendulkar, Sunil Gavaskar etc.

Because, when Alan Donald once said about Sachin Tendulkar, ‘Sachin won’t be dismissed twice on the ball he was dismissed once’. this is the truth. He could have been edged several times by pitching outside the off-stump. But the size, direction and speed of each ball would have changed and there would have been some deviation in the ball to deceive him. But the question is how Virat Kohli is considered a world class player who gets out the same way for many balls of same length, same direction and same speed.

Computational numbers such as how many matches he has chased and how many hundreds he has scored are never enough to determine quality standards. A thousand players could have played a thousand innings at Perth. But a 65 against Australia by England’s Graeme Hick once equaled 200 on a tough Perth pitch. Because bowling and pitching are like that. One of the greatest shots in cricket history was Graeme Hick’s delivery to the long midwicket boundary for a six.

Sunil Gavaskar once against Pakistan in Bengaluru on a perfect hole pitch, Pakistan’s off-spinner Tasif Ahmed was pitching the ball off the pitch and returning it outside the leg stump. Unplayable pitch. Gavaskar’s 96 in that is more than any other innings in the world. Can you still forget Sachin’s 111 against tough fielding and bowling against South Africa?

Once the May Isles toured Australia, Australia’s pacer Denis Lilley was at his peak, with ferocious fast bowlers Thomson and Len Pascoe. After seeing what Sunil Gavaskar said in his book ‘Idols’ that Vivian Richards’ lowest individual score was 70 in that series, Virat Kohli, who was bowled on the wrong line and bowled on the wrong line on the front foot today, is king with his Bangladesh, Sri Lanka and Afghanistan centuries. How do you accept when Kohli is said to be world class? Kohli is world class in his own right, but he has nothing to compare with the greats of world cricket. 2014: Stuck by James Anderson, then thousands of days without a century dry up again to score centuries against lesser teams.

That too in the Bangladesh series, how can it be accepted as a world class player’s game if he was bowled for 1 run off 22 balls in the Test match?

What happened yesterday? – Sandner blows. First ball goes outside the leg stump. Couldn’t connect this boundary ball. The next ball just fell flat on length and turned very lightly. Kohli misjudged the direction of the ball, took a slight turn and was bowled on the stumps.

The speed of the ball is 92 kmph. Maybe the pace cleared the wicket, but this full length ball should have been played had it not been on the front leg. If it had been bowled like that, it would have been a nothing ball, he was bowled unprepared for the turn of the ball inside the line as it went on the back foot. Big turn, if he had covered the stumps and got bowled between the bat and leg cover, we can agree that it was a big punt. It was Virat Kohli’s misplay that turned a normal ball that would have been nothing if it had been bowled on the front foot into a wicket ball. In fact he didn’t even move his back leg.

This is the 2nd time Kohli has been dismissed by Sandner. Sunil Gavaskar said in this regard: “Kohli played inside the line of that ball. So Kohli allowed the ball to return slightly. He made a huge mistake by playing the ball from behind, which he should have gone forward to play. It was not a short pitched ball. A slight return is the same. It was bowled past the outside edge of Kohli’s bat, who is in good form.

There is always a difference between a ‘good player’ and a great player, and Virat Kohli is a good player.