TechIs the Apple Watch 7 worth the wait?
Tech

Is the Apple Watch 7 worth the wait? 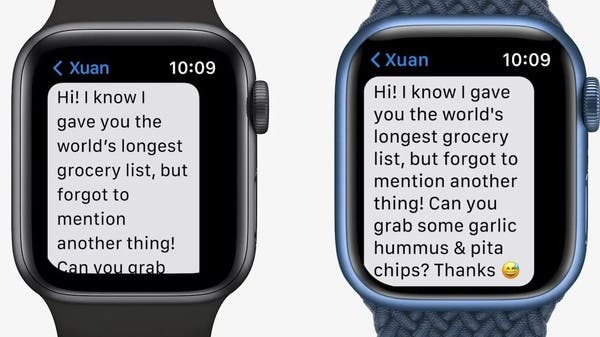 Ahead of Apple’s recent event about the new Apple Watch 7, rumors abounded, as everyone expected to change its design completely.

But Apple decided not to change the design of the watch significantly compared to previous generations, and relied on an increase in the size of the screen compared to the old generations.

I was able to do this by reducing the size of the unused black bezels, and this increased the screen size to 41 or 45 mm.

But is the Apple Watch 7 worth the wait instead of owning the sixth or fifth generation of the watch?

New changes in the Apple Watch 7

Apple relied on a new glass to cover the front and edges of the watch, and Apple says that the new glass is highly resistant to scratches and fractures.

I was also able to add a full keyboard in the watch face so you can easily use it to reply to messages and other things.

Some of the usual improvements have come with the watch, which now charges slightly faster with MagSafe charging, as well as software improvements to the system.

Apple has not announced which chip the watch uses in its seventh generation, so everyone expects the sixth generation chip to be the same.

If the predictions are correct and Apple uses the sixth generation processor in the Apple Watch 7, this means that the differences between the two watches have become less.

While the screen size difference between the two watches may be a tempting reason to get the 7th Gen, this size causes a problem when purchasing accessories and watch straps.

This is because you need to buy straps specifically for the seventh generation of the watch instead of using the straps of the previous generations.

Also, the lack of development of the watch processor means that Apple will not be able to exclude the sixth generation from the line of updates soon.

So you get the same updates between 6th and 7th generation together.

You can also get a watch at a discounted price, such as the economic Apple Watch SE.

Apple continues to sell the third generation of its smartwatch, despite it being a direct competitor to the SE watch.

So if you are looking for the best value for money in buying an Apple Watch, you can buy the sixth generation of the watch.

If you want to get the latest watch, no matter how small the difference between it and other watches.

The Apple Watch 7 is the watch for you, because it’s the latest Apple has to offer without any real technical advances.

Previous articleAl-Ahly of Egypt decides to increase Musimani’s salary.. Find out how much the coach will receive
Next articleMaricarmen Marín excited about the progress of her pregnancy: “Finally a little belly came out!”